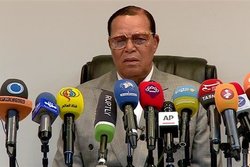 The leader of the US-based Nation of Islam Movement Louis Farrakhan has called for a separate state for African Americans, saying that’s “what God wants.”

RNA - Farrakhan made his call for a nation-state separate from white America in response to the question whether it’s still his and the group’s goal.

“That's not just my goal. That's what God wants. Most of our people don't want it here,” Farrakhan said in an Instagram video.

The Muslim preacher went on to reiterate that neither he nor his group has changed its goal of a separate state since its creation in the 1960s.

“Let me tell you what's gonna happen. Yes I'm after a separate state. A separate nation. In the 60s what was our cry? We weren't saying we want to integrate, we were saying 'It's nation time!'” he said.

In November, Farrakhan made a solidarity trip to Iran, where he told Iranian students that “America has never been a democracy.”

According to Press TV, he has blasted US President Donald Trump’s policies in the Middle East, saying the US is trying to create further division between Shias and Sunnis in the region.

Farrakhan has also called on the international community to rise up against the persecution of Muslim people around the world.

Tags: Farrakhan African American US Islam
Short Link rasanews.ir/201rJr
Share
0
Please type in your comments in English.
The comments that contain insults or libel to individuals, ethnicities, or contradictions with the laws of the country and religious teachings will not be disclosed