US calls on new Lebanese government to block Hezbollah 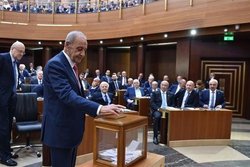 The United States has urged Lebanon to deprive the Hezbollah resistance movement of all official funds following the formation of a new government headed by Prime Minister Saad Hariri.

The breakthrough came after rival factions worked out a compromise allowing representation of Sunni lawmakers backed by Hezbollah. The movement chose three people, including Jamil Jabak, as the new health minister, despite the fact that he is not a member.

On Friday, Washington said it was ready to work with Hariri's new government, noting that Secretary of State Mike Pompeo hoped to visit Beirut.

"Nevertheless, we are concerned that Hezbollah, a US-designated Foreign Terrorist Organization, will continue to occupy ministerial positions and was allowed to name the minister of public health," State Department spokesman Robert Palladino said.

"We call on the new government to ensure the resources and services of these ministries do not provide support to Hezbollah," Palladino added in a statement.

According to Press TV, Washington claims that the resistance movement condones terrorism despite the fact that Hezbollah has been involved in a fierce fight against Takfiri terror groups, including Daesh and al-Nusra Front, thus preventing the spillover of the militancy gripping neighboring Syria into Lebanon.

In addition, Washington has for long accused Hezbollah of being behind the 1983 bombing attack, in which 241 US Marines were killed.

In October, the administration of President Donald Trump imposed a new round of sanctions on the movement, targeting individuals and international organizations that do business with the group.

Hezbollah was founded in the 1980s following the Israeli invasion and occupation of southern Lebanon. The movement waged a long resistance campaign against Israeli forces and pushed them out of southern Lebanon in May 2000. Since then, the group has grown into a powerful military force. Israel also suffered a humiliating defeat from Hezbollah in the 2006 war.

Tags: US Lebanese government Hezbollah
Short Link rasanews.ir/201rJq
Share
0
Please type in your comments in English.
The comments that contain insults or libel to individuals, ethnicities, or contradictions with the laws of the country and religious teachings will not be disclosed