The biggest obstacle to Israel is the Palestinian people 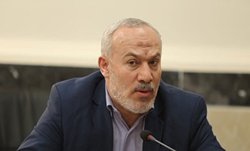 Rasa – Naser Abu Sharif said, “The Zionists want to dominate over the Palestinian territories ‎and this issue begun 100 years ago and the biggest obstacle to them is the Palestinian ‎people.”‎

RNA – The first one-day session of the symposium on “Review of the Strategies For ‎Combatting Zionism,” with an emphasis on cultural struggle and soft war, was held ‎in the ‎conference hall of Rasa News Agency in Qom.‎

Naser Abu Sharif, the representative of the Islamic Jihad Movement in Palestine, referred to ‎the enemies’ attempts to settle the Palestinian issue, stressing, “The nature of this is clear to ‎everyone that this in the interest of Israel.”‎

Abu Sharif stressed that Israel faced two issues in regard to Palestine and said, “One was the ‎occupation of Palestinian land and the other was the Palestinian people. We must not forget ‎the assistance of the American forces in this regard. Of course, the United Kingdom also had ‎a large role in the establishment of this cancerous tumour.”‎

He said, “In 1948, two-thirds of the Palestinian people were expelled and 78% of the land ‎was occupied by Jews. In fact, this issue was provided to Jews through land laws or a ‎plenipotentiary British representative.”‎

Abu Sharif recalled, “They expelled 8,000 people from the Palestinian territories and while ‎they occupied only 5% of the Palestinian land before 1948, they invaded the Sinai peninsula ‎in 1956 and after their defeat in this war [Suez Crisis], they reoccupied the Sinai and the ‎West Bank.”‎
‎
112/979‎

Tags: Palestine Abu Sharif Islamic Jihad
Short Link rasanews.ir/201rJb
Share
0
Please type in your comments in English.
The comments that contain insults or libel to individuals, ethnicities, or contradictions with the laws of the country and religious teachings will not be disclosed