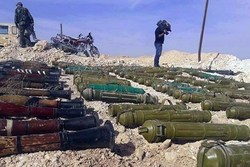 The Syrian army found a large number of weapons and military equipment, including Israeli and western arms, during cleansing operations in Eastern Damascus.

RNA - The engineering units of the Syrian army found the large cache in the Eastern Ghouta of Damascus on Thursday.

The Syrian army found a large number of weapons and military equipment, including Israeli and western arms, during cleansing operations in Eastern Damascus.

The engineering units of the Syrian army found the large cache in the Eastern Ghouta of Damascus on Thursday.

Last week, the Syrian army found a large number of weapons and ammunition, including Israeli and western arms, during cleansing operations in the former bases of terrorists near Damascus.

The engineering units of the Syrian army discovered weapons and military equipment, including different types of mortars, artilleries, RPGs and over 200,000 rounds of machine-guns and guns, in operations to purge terrorists from the towns near Damascus.

The Syrian and Russian armies have sent new military convoys to Northern Syria to launch military operations as they continue to repel offensives of Tahrir al-Sham al-Hay'at (the Levant Liberation Board or the Al-Nusra Front) terrorist group and its allies in Northern Hama and Southern Idlib.

Field sources in Northern Syria reported on Thursday that the Syrian army has sent a large military convoy, consisting of hundreds of forces and heavy military equipment, from Southern Syria to its positions in Northern Hama.

They added that the Russian military forces have also been sent to Southeastern Idlib near Abu Zohour airbase, noting that Moscow and Damascus are preparing for operations to cleanse Tahrir al-Sham militants from Northern Syria.

The Russian fighter jets and reconnaissance planes are also permanently flying over the regions occupied by terrorists in Northern Syria.

Meantime, the Syrian army forces stationed near the town of Mahradah in Northern Hama targeted the terrorists' moves from the town of Tal al-Sakhar to their military positions with artillery and missile fire, inflicting heavy tolls on them and repulsing their heavy attack.

In a relevant development, media reports said that Ankara is integrating the terrorist groups in regions occupied by them in Northern Syria

Sources said that the move contradicts Turkey's undertakings under the Sochi agreement.

According to Fars News Agency, Syria's Arabic-language al-Watan newspaper quoted sources close to the terrorists as saying on Thursday that the Turkish military and intelligence officials have promised the ringleaders of Ahrar al-Sham, Nour al-Din Zinki and the so-called National Liberation Front (NLF) terrorist groups that they will merge them along with Tahrir al-Sham al-Hay'at (the Levant Liberation Board or the Al-Nusra Front) within the framework of a military organization.

They added that Turkey has also promised them to set up a parliament and an autonomous government after dissolution of Tahrir al-Sham in territories occupied by the militants, adding that Faylaq al-Sham which has recently been joined by 18 other terrorist groups in Northern Idlib and Western Aleppo is due to be the political branch of the new organization and Tahrir al-Sham will take the responsibility for its military wing.

The military experts warned that Turkey's measures are against the Sochi agreement to establish a demilitarized zone in Northern Syria and the Turkish president's promises to his Russian counterpart in the last week meeting in Moscow, adding that the move by Ankara has left the Syrian army with the only option of cleansing Tahrir al-Sham from the demilitarized zone.

Tags: Israel Damascus Syria
Short Link rasanews.ir/201rJQ
Share
0
Please type in your comments in English.
The comments that contain insults or libel to individuals, ethnicities, or contradictions with the laws of the country and religious teachings will not be disclosed