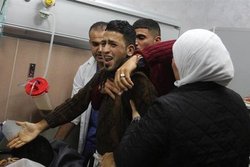 Israeli forces have brutally beaten two handcuffed and blindfolded Palestinians, a father and his son, then removed the blindfold from the son’s eyes and forced him to watch his father being beaten up, Haaretz reports.

RNA - The soldiers slapped, punched and bludgeoned on January 8 the two detainees and then took the blindfold off of the son’s eyes to make him watch them abuse his father until his ribs and nose were broken, the newspaper reported.

The two had been arrested under the pretext of helping gunmen involved in a December shooting which killed two Israeli soldiers.

The soldiers made "calls of joy and boasting" during the violence which inflicted heavy injuries to the detainees, the report said.

On Wednesday, thousands of demonstrators took to the streets in central Tel Aviv to urge a probe into a fatal shooting which killed an Israeli of Ethiopian descent.

One of the protesters said she joined the rallies because "there is racism everywhere" and that she felt like she did not belong to the entity.

Demonstrations turned ugly as some protesters hurled rocks and bottles at police officers. Some people from the two sides were injured and at least nine protesters were arrested.

Apart from Israeli soldiers, settlers engage in provocative, violent, and sometimes deadly actions against Palestinians on a regular basis.

Since 2015, the occupied territories have been the scene of heightened tensions due to Israeli measures which Palestinians view as a bid to change the status of the al-Aqsa Mosque compound in Jerusalem al-Quds.

US President Donald Trump's recognition of Jerusalem al-Quds as Israel’s capital and relocation of the US embassy to the occupied city has fanned the flames of the tensions.

In December 2017, the United Nations General Assembly overwhelmingly voted in favor of a resolution that called on the US to withdraw its controversial recognition of Jerusalem al-Quds as Israeli “capital.”

Tags: Israel Palestinian Haaretz al-Aqsa Mosque
Short Link rasanews.ir/201rJN
Share
0
Please type in your comments in English.
The comments that contain insults or libel to individuals, ethnicities, or contradictions with the laws of the country and religious teachings will not be disclosed