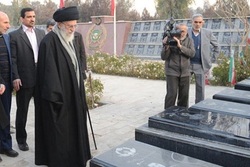 RNA - On Wednesday, Ayatollah Khamenei visited Imam Khomeini’s Mausoleum in southern Tehran, where he offered his prayers and recited verses from the Holy Qur’an.

The Leader then visited the burial ground of the martyrs, where he prayed for the souls of the people who lost their lives either during the popular uprising that led to the Revolution or in the course of their struggle to uphold revolutionary values afterwards, in Behesht-e Zahra, Tehran's main cemetery.

Ayatollah Khamenei also paid tribute to those martyred on June 28, 1981, during a bomb attack staged by the notorious US-backed Mujahedin-e-Khalq Organization (MKO) terror group in Tehran.

The Leader also offered his prayers at the tombstones of those who lost their lives during the 1980-88 Iraq war against the Islamic Republic.

The annual celebrations will start on Friday, beginning with the anniversary of Imam Khomeini’s return to Iran in 1979 from forced exile by the country’s ousted monarchical Pahlavi regime in Paris.

According to Press TV, the ten-day celebrations will culminate on February 11, which marks the anniversary of the Islamic Revolution.

The period witnessed last-ditch efforts by the Washington-backed regime of Iran’s former monarch to hold onto power by unleashing deadly force against pro-Revolution protesters.

The entire struggle resulting in the Revolution was led by Imam Khomeini, who successfully united the people against Pahlavi oppression and dependence on the US.

Separately, President Hassan Rouhani and his cabinet ministers visited the Imam Khomeini Mausoleum and the Behesht-e Zahra Cemetery on Tuesday.

The cabinet members renewed their allegiance with the ideals of the Islamic Revolution, and pay their tributes to the martyrs.

Tags: Leader lmam Khomeini Iran martyr
Short Link rasanews.ir/201rIz
Share
0
Please type in your comments in English.
The comments that contain insults or libel to individuals, ethnicities, or contradictions with the laws of the country and religious teachings will not be disclosed