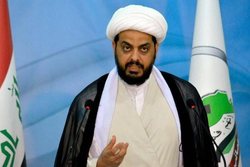 RNA - In response to the recent Israel threat to air strike against Iraq, Sheikh Qais al-Khazali, secretary general of Iraqi Asaeb Ahl al-Haq movement stated, “If the Zionist regime under any reason wants to target Iraq, Iraq will have the right to defend itself as a sovereign state and we will give it an unlimited answer”.

In the meantime Qais Khazali said in an interview with the Associated Press that, given the defeat of ISIL, there is no justification for the continued presence of thousands of American troops in Iraq.

He remarked that if the US military does not act on the will of the Iraqi people to leave the country, they will eventually be driven out of Iraq by force.

“The main purpose of US presence in Iraq was to confront ISIL's military threat. Now that the threat has been resolved, there is no justification for maintaining that number of American forces in Iraq,” he said.

Tags: Sheikh Qais al-Khazal Iraq Asaeb Ahl al-Haq Israel
Short Link rasanews.ir/201rIu
Share
0
Please type in your comments in English.
The comments that contain insults or libel to individuals, ethnicities, or contradictions with the laws of the country and religious teachings will not be disclosed