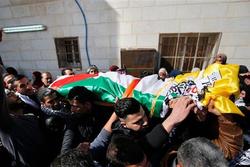 A series of violent clashes have broken out between Palestinian youths and Israeli regime forces in a village of the occupied West Bank, where mourners were waiting for the funeral procession of a man who was killed by Israeli settlers a day earlier.

RNA - Medical sources said on Sunday that one Palestinian youth was shot by Israeli forces in his foot while dozens of others suffered from tear gas inhalation at the entrance of Turmusayya Village, near the city of Ramallah.

The Sunday skirmishes followed a raid by Israeli settlers on the nearby West Bank village of al-Mughayer on Saturday evening, which led to a Palestinian man being shot dead and dozens more sustaining injuries. Thirty eight-year-old Hamdi Taleb Na’san was killed and 30 others were wounded after Israeli settlers escorted by regime troops stormed al-Mughayer, which is located 27 kilometers northeast of the city of Ramallah in the occupied territories.

At least six of those injured were struck with live ammunition, while the 24 others suffered wounds after being hit with rubber-coated steel bullets.

Na’san is the fourth Palestinian killed by Israeli violence across the Palestinian territories over three days.

Reacting to the latest attack, UN Special Coordinator for the Middle East Peace Process Nickolay Mladenov in a Twitter post on Sunday voiced “shock” at the “terror” carried out by Israeli settlers in al-Mughayer.

According to Press TV, Israeli settlers engage in provocative, violent, and sometimes deadly actions against Palestinians on a regular basis.

In October 2018, an extremist teenage settler killed a Palestinian mother in the northern West Bank by throwing a rock at her.

The most violent incident of the recent years involving Israeli settlers was an arson attack against a Palestinian home in the town of Duma, located 25 kilometers southeast of Nablus in northern West Bank on July 31, 2015.The fire killed an 18-month-old baby boy, Ali Dawabsha, on the spot. Ali’s mother, Riham and her husband, Saad, were severely injured in the attack and both died later in hospital.

Tags: Israel Palestinian West Bank
Short Link rasanews.ir/201rIJ
Share
0
Please type in your comments in English.
The comments that contain insults or libel to individuals, ethnicities, or contradictions with the laws of the country and religious teachings will not be disclosed