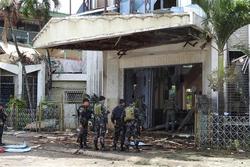 At least 20 people have lost their lives and dozens of others been injured after two bombs hit a church on a southern Philippine island, which is home to a Daesh-linked terrorist group.

RNA - Security officials said the first blast took place during Sunday mass at a Roman Catholic cathedral on Jolo island in the Philippines’ restive Sulu province. It was followed by a second explosion in the parking lot as troops were responding to the first.

Photos released by regional police showed debris scattered near the church's entrance and a damaged military truck with a broken windshield.

"The motive is surely... terrorism. These are people who do not want peace," regional military spokesman Lieutenant Colonel Gerry Besana told AFP, adding that 81 people were wounded in the twin explosions.

The Philippine Defense Ministry condemned the bombing and urged people to "remain calm and avoid spreading panic in respective communities to deny terrorism any victory."

There was no immediate claim of responsibility but police suspect the blasts were the work of the Abu Sayyaf Takfiri terrorist group, which has pledged allegiance to Daesh and is notorious for its bombings and brutality.

"We will pursue to the ends of the earth the ruthless perpetrators behind this dastardly crime until every killer is brought to justice and put behind bars. The law will give them no mercy," the office of President Rodrigo Duterte said in a statement.

The bloodshed comes nearly a week after a referendum backed a new Muslim-majority autonomous region in the south of the largely Roman Catholic country.

The vote was aimed at bringing a peaceful resolution between the government and the rebel group of the Moro National Liberation Front (MNLF) in a conflict that has claimed 120,000 lives since the 1970s.

The majority of the 2.8 million people participating in the referendum supported the autonomy vote, but the town of Jolo rejected it.

The Philippines Commission on Elections announced on Friday that the referendum was ratified after counting the votes from five provinces.

Tags: Blast Muslim Philippines
Short Link rasanews.ir/201rI5
Share
0
Please type in your comments in English.
The comments that contain insults or libel to individuals, ethnicities, or contradictions with the laws of the country and religious teachings will not be disclosed