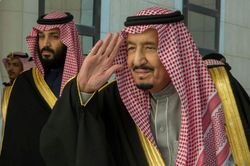 A leading Lebanese paper said after 4 years of King Salman's ruling over Saudi Arabia, political executions and unemployment have increased in the country and his reforms have proved fruitless.

RNA - The Arabic-language al-Akhbar newspaper reported on Saturday that nearly 50 young men have been killed by the Saudi security forces in residential areas in al-Qatif province in Eastern Saudi Arabia between 2015 to 2018, while political executions have sorely increased during King Salman's ruling.

Meantime, the United Nations Conference on Trade and Development announced in June 2018 that foreign investment in Saudi Arabia has decreased to $1.4bln in 2017, the paper said, adding that the capital outflow from the country speeded up after the death of prominent journalist Jamal Khashoggi in 2018.

Al-Akhbar also noted that 13mln people, including 9.9 foreign workers, had jobs in Saudi Arabia in the second quarter of 2018, while the number of unemployed people seeking job in the country stood at 1.1mln in the same period.

King Salman, a son of King Abdulaziz, acceded to the throne in January 2015 after the death of his half-brother Abdullah bin Abdul Aziz.

He launched his first major cabinet reshuffle a few months later, promoting Mohammed bin Nayef to crown prince and Mohammed bin Salman, who was relatively unknown at that time, to deputy crown prince.

In June 2017, the Saudi king appointed his son Mohammed bin Salman as crown prince - replacing his nephew, Mohammed bin Nayef, as first in line to the throne.

Prince Mohammed bin Nayef, 57, was removed from his role as head of domestic security.

Tags: Salman Saudi Mohammed bin Salman
Short Link rasanews.ir/201rHt
Share
0
Please type in your comments in English.
The comments that contain insults or libel to individuals, ethnicities, or contradictions with the laws of the country and religious teachings will not be disclosed