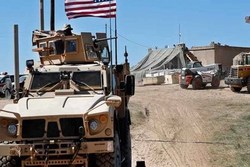 The US Army continued reinforcing its military bases in Syria despite US President Donald Trump's declared decision for a pullout of Syria.

The US Army continued reinforcing its military bases in Syria despite US President Donald Trump's declared decision for a pullout of Syria.

The London-based Syrian Observatory of Human Rights (SOHR) reported that US military convoys comprising 250 military trucks have entered the provinces of Aleppo, Raqqa and Hasaka.

The SOHR noted that the trucks carried ammunition and logistical supplies for the US troops in Syria, and said that the trucks were unloaded in Ain al-Arab, Ain al-Arab Airport, Ain Issa, Raqqa and Tal Tamr as well as several other military bases in Raqqa, Hasaka and Aleppo provinces.

The Syrian Army thwarted fresh attacks by Tahrir al-Sham al-Hay'at (the Levant Liberation Board or the Al-Nusra Front) and their allied terrorist groups from the demilitarized zone on their positions in Northern Hama.

The Syrian Army's artillery units heavily pounded the military positions of Tahrir al-Sham al-Hay'at and Jeish al-Izza terrorist groups in the surrounding areas of the town of al-Janabereh and al-Latamanieh in Northern Hama in response to terrorists' attacks from the demilitarized zone.

According to Fars News Agency, the Syrian Army troops destroyed several terrorist positions and military equipment in their attacks, and killed a large number of the militants.

Meantime, the Syrian Army's artillery units also pounded the terrorists' movements in the towns of Mourek and Hasaraya in Northern Hama, inflicting heavy losses on the terrorists after fending off their attack.

The Turkish Army attacked the military positions of the Syrian Democratic Forces (SDF) in Aleppo and Raqqa near the borders with Turkey.

Turkey's Army attacked the SDF military positions in the surrounding areas of the village of Quneitra North of the town of Solouk in Northern Raqqa and along the borders with Turkey, battlefield sources in Northern Syria said.

The artillery units of the Turkish Army and its allied forces also heavily pounded the SDF's military positions in the town of Tal Rafat in Northern Aleppo.

Media activists in Hasaka province, meantime, reported that the Turkish Army has dispatched fresh forces and military equipment to the border with Syria adjacent to the town of Qamishli.

Tags: Syria US Raqqa Hasaka
Short Link rasanews.ir/201rHq
Share
0
Please type in your comments in English.
The comments that contain insults or libel to individuals, ethnicities, or contradictions with the laws of the country and religious teachings will not be disclosed