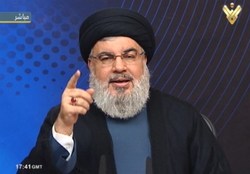 Leader of the Lebanese resistance movement Hezbollah has openly mocked Israel’s claims that it had discovered secret tunnels used by the group on the border between Lebanon and the occupied Palestinian territories, saying Israel was deeply wrong to think that the closure of tunnels would save it from future attacks by the resistance movement.

RNA - Speaking to the Lebanese TV station al-Mayadin on Saturday, Sayyed Hassan Nasrallah said some of the secret tunnels run by Hezbollah that Israel claims to have discovered and destroyed in a recent operation had been built by the Lebanese group over a decade ago.

“What surprises us is that the Israelis were late to discover these tunnels ... some of those tunnels preceded the 2006 war,” Nasrallah said.

The Lebanese leader said the tunnels formed only a small part of Hezbollah’s strategy to target Israel in case a war erupts between the two, adding that it was Tel Aviv regime’s fantasy to claim that destruction of tunnels has saved it from future attacks.

“Is it logical that Hezbollah would enter the Galilee with thousands of fighters through four tunnels?” he said, adding, “I do not know whether we will attack the Galilee by sea, air, land or tunnels.”

Israel failed to uncover all tunnels

Nasrallah also refused to confirm the existence of other tunnels leading to the Israeli-occupied territories, saying that should remain a “constructive mystery.”

The Hezbollah leader said that Israeli Prime Minister Benjamin Netanyahu and his military commanders failed to undermine Hezbollah through their revelations about the tunnels, saying a two-month operation that ended this month and was meant to expose the four tunnels had effectively helped Hezbollah because it caused fear among Israeli settlers.

“All of Netanyahu's goals failed, and he also helped us in the realm of psychological warfare,” he said.

Tags: Hezbollah Israel Sayyed Hassan Nasrallah
Short Link rasanews.ir/201rHp
Share
0
Please type in your comments in English.
The comments that contain insults or libel to individuals, ethnicities, or contradictions with the laws of the country and religious teachings will not be disclosed