Venezuela Is Nothing Without a Chaos for Trump and His Team 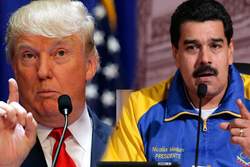 After a week of support from the US State Department, Venezuelan opposition leader Juan Guaido has declared himself the interim president of Venezuela. President Trump almost immediately followed this with a formal recognition of the change!

RNA - The 35-year-old Guaido is head of the National Assembly, and says he feels the need to step in during the chaos surrounding President Maduro’s recent swearing in to a second term in office.

Maduro has not recognized the decision to remove him from power, and declared that he is cutting all diplomatic ties with the United States. He announced that US diplomatic personnel have 72 hours to leave Venezuela.

President Trump has made removing Maduro from power a long-standing priority, at times urging a military coup, at times suggesting that the US might invade outright. The Trump administration is reportedly considering imposing new oil sanctions on Venezuela this week if Maduro doesn’t leave power.

It means what it means. In the land of take-what-you-want, Venezuela is nothing without a little chaos for Trump and his White House team of karmic calamity. Perhaps, they want to make it interesting and under control. Perhaps, their so-called global dominance is even defined in terms of control or that in chaos there is fertility. But this manic stage they are in also shows us that the control the White House policymakers believe they have is purely illusory, that every moment they teeter on chaos and oblivion.

The only stable thing in this swirling bedlam, however, is that when they engage in destructive diplomacy, they engage with threat, looking at the world through different ends of the telescope. Here in the case of Venezuela, there are only patterns to be had. Patterns on top of patterns, patterns that affect other patterns, patterns hidden by patterns, and patterns within patterns. If you watch close and spare a thought on their unprepared, unprofessional, folksy, buffoonish diplomacy and threat, such patterns, which the Trumpsters claim are bereft of prejudice and menace, are poison to any Venezuelan national.

This is not a policy at all but righteous self-delusion. If this is not American decline on a planet in its own kind of decline, we don’t know what is. In these last few weeks alone, the urge by Trump to blame outside circumstances for government shutdown and his inside chaos has continued in an extraordinary pace and with unanticipated and unpleasant costs. Week by week, tweet by tweet, Trump has made it clearer than ever that the United States is without the mandate of bilateral or multilateral treaties or in violation or defiance or rejection of such treaties, and hence not fit to lead the civilized world.

According to Fars News Agancy, this might be welcome news for peace activists and human rights groups who have grown tired of American exceptionalism, endless wars and humanitarian disasters in the Middle East and beyond. But there are other ways through which pro-Trump populists and allies alike can continue to cheer: Trump’s cancellation of one international accord after another, imposition of new sanctions against Iran, Russia, Syria, and now Venezuela, support for the idea of focusing on Israel and Saudi Arabia and their actions in Gaza and Yemen – despite criticisms from United Nations and European Union.

Given this basic imbalance, the acceleration of US decline amid Trump’s inconsistent one-man style of diplomacy is indeed underway, albeit with some unanticipated and unpleasant costs for the civilized world. This is where multilateralism, the gears, the workings, the ending of so much American chaos comes in as well. Trump’s diplomatic dysfunction might have offered him a few “wins” here and there, but it has also degraded Washington’s global stature with some profound costs.

This is all common sense. After openly challenging the world through military conflicts and economic warfare, America is now challenging Venezuela, and the elected government there is fighting back. In consequence, Washington’s clout in South America is being reduced slowly but surely, potentially opening the way for the rise of a multilateral region that’s all-inclusive and balanced.

Given that basic balance, America will continue to decline, and the civil society will continue to relish the opportunity this isolation opens to make political statements and figure out how to achieve the objectives of a region that’s based upon the principles of multilateralism and of international law.