In the Middle East, a new order is in place. Assad is a sign. 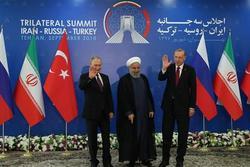 While the world has clearly vastly changed since the 19th century, the statesmen of 19th-century Europe would have recognized the political workings of the world in the 21st. Some 200 years on, there is still almost no country that would not want to expand its influence — if no more its territory — abroad, at least in its immediate neighborhood.

RNA - But countries generally keep those ambitions for influence to themselves. China is perhaps the biggest example. It may be saying one thing, but it may be doing another.

The United States, a “courtesy” Great Power of the 19th century, is the only power in the 21st that is still openly professing ambitions for global influence and leadership. In doing that, and in misplacing those ambitions, it is becoming consumed by its rhetoric while being distracted from its real geopolitical interests, and is thus wasting its resources.

Today, as in the 19th century, power is measured by how big your naval fleet is. Yet, as was also the case back then, how smart you play your hand also matters. Raw power and tact combined determine who manages to set the agenda on the ground. In the Middle East, it is increasingly becoming clear that America, in spite of the massive size of its military, is not the agenda setter.

The Middle East is understandably a region of interest for America. But it is also a fulcrum of tensions and a region in flux. It is uncharted territory for outsiders, and that includes 21st-century superpower America.

Notably, the Middle East has considerably changed since roughly 2016, when Iran, Russia, and Turkey formed a partnership and developed what could become a model to manage regional matters by agreeing to cooperate to end the Syrian conflict.

The three countries of course have differences on policy matters, but that they belong to the region has certainly helped with a largely successful execution of negotiated plans for Syria. (It is their region; they know it; and they are the ones who deal with its everyday problems.)

As a result of that cooperation, the Syrian conflict is in its last chapters. Bashar al-Assad, president of Syria, who many believed not long ago was bending and was about to fall, has by all accounts won the war. It is too soon to speculate whether he will win the peace, too, or not, but countries long wishing to see him gone are now reopening their embassies in Damascus one by one.

Last Friday, January 11, 2019, a United States-led coalition that has been in Syria since roughly 2014 also began a process of withdrawing from the Middle Eastern country.

Whether American officials are guided by the right understanding of the facts on the ground in making that decision is unclear. It is a step in the right direction, nevertheless, not just because US presence was unwarranted and illegal but also because it had been made nonsensical.

That scenario came about not just because America played its disproportionately stronger hand badly, but also because it had no urgent interest in Syria (and more broadly the Middle East) in the first place. Syria and Assad were the wrong fights for America. As is Iran.

True. In Syria, and with its mere presence and physical occupation of a however small plot of land, the United States was imposing its will on that country and its allies. But strategic battles are defined by their end results.

By turning the military and political tide in their favor over a longer period of time, the Syrian government and its allies — Russia and Iran — actually made the continued presence of the American troops unnecessary and, therefore, meaningless. Turkey, in the meanwhile, offered the kinds of guarantees that would satisfy the White House — or at least President Trump — and the Kurds agreed to ally with the Syrian government.

That is not just military strategy. That is political strategy, diplomacy, and consensus building.

“‘Gunboat diplomacy’ does not get you far without a gunboat. Or aircraft carrier,” writes Tom Fletcher, Britain’s former ambassador to Lebanon, in his book “Naked Diplomacy.” True enough. But perhaps the biggest difference between power in the 19th century — when “gunboat diplomacy” was born — and in the 21st is that the latter is being exercised by more and increasingly more agile players.

For the foreseeable future, that is going to be the new reality of the Middle East, where Russia, Iran, and Turkey continue to be partners. Until the geopolitical reality on the ground continues to be like that, America will have no benefit in entangling itself in the affairs of the Middle East.

Meanwhile, China is becoming a more serious contender for global supremacy. America may have an interest in focusing its resources on a healthy rivalry with Beijing.

Of course, American officials are very likely to continue to be distracted by the Middle East. Dependent regimes in the region will continue to nip at America’s heels. There is Israel, which, by spending billions in lobbying, exercises an effective veto on American policy. There is Saudi Arabia, which impacts US policy even more crudely. And then there are other, less conspicuous free-riders.

But the reality is that Middle Eastern geopolitics is no more being shaped according to America’s will — or its planning. Assad is only one sign. Whether America will want to come to grips with that reality or not is America’s call. That is just the reality.

Tags: Middle East Iran Russia Turkey Syria
Short Link rasanews.ir/201rHP
Share
0
Please type in your comments in English.
The comments that contain insults or libel to individuals, ethnicities, or contradictions with the laws of the country and religious teachings will not be disclosed