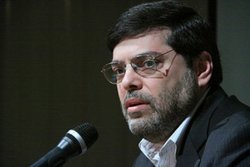 Seyed Mohammad Marandi, a political analyst and an academic at Tehran University, condemned the US detention of Press TV journalist Marzieh Hashemi, criticizing the American media for following Washington's unjust policies against other countries.

RNA - "The American media mimic whatever the US government says," Marandi said, addressing a meeting held by the Iran-based Association of Muslim Journalists in Tehran on Wednesday to protest at the detention of Hashemi in the United States and to ask for her immediate release.

He referred to different cases of US and Israel's illegal detention and killing of journalists and academics, and said Seyed Mahmoud Mousavi, the head of an Islamic institution in Los Angeles, was kept in solitary confinement, developed cancer and died soon after freedom.

Marandi also reminded of the murder of a Lebanese journalist working for Press TV who was killed at the borders with Syria after being threatened by an intelligence service, as well as targeted killing of medics and journalists by the Israeli snipers, and said "so, I have no more expectations from the mainstream media" to cover Marzieh Hashemi's case.

He called on the international media to put pressure on the US government to free Hashemi.

Also, at the end of the meeting, Maryam Azarchehr, one of Hashemi's colleagues and friends, addressed the meeting, saying that millions of people are praying for her freedom.

She said that #freemarziehhashemi and #prayformarzieh have been launched by social media activists to support her and call for her release.

Representatives of different media outlets participated in the roundtable and press conference titled "In Solidarity with Marzieh Hashemi, the Black American Muslim Journalist Illegally Held In US Prison" to shed more light on Hashemi's case.

Nader Talebzadeh, an Iranian researcher and film director and film producer and Seyed Mostafa Khoshcheshm, a political analyst and journalist, addressed the meeting as well.

Hashemi, a 59-year-old American-born Muslim convert who has been living in Iran for years, was detained at St. Louis Lambert International Airport in Missouri on January 13 while she was in the US to visit her ill brother and other family members.

She was transferred to a detention facility in Washington DC, where she was forced to remove her hijab and only offered food not permissible under her Islamic values.

After days of silence, the US government confirmed on Friday that it was holding Hashemi in jail as a “material witness,” and that she would be released after she testified before a grand jury. She appeared in court on Friday for the second time for a hearing session, and is slated to appear before the jury for a third time on Wednesday, January 23.

Addressing a meeting with senior Iranian judiciary officials, Amoli Larijani added that it is quite clear that the US and West were using the issue of human rights as a tool.

"In the recent case, they claim that this journalist has been detained as a 'witness'. This is the first time that I hear a country detains its own national - who is only a witness - in her own homeland without there being any fear about her possible flight from the country," he said.

Amoli Larijani said the US judicial system was responsible for any possible harm to Hashemi, adding that the US' problem with the Iranian journalist was that she defended the Islamic Revolution in Iran and criticized the United States' crimes in different parts of the world.

The Iranian judiciary chief also ordered the country's prosecutor general to take all necessary measures to defend Hashemi's rights and secure her release.

Tags: Press TV Marzieh Hashemi US Seyed Mohammad Marandi
Short Link rasanews.ir/201rHK
Share
0
Please type in your comments in English.
The comments that contain insults or libel to individuals, ethnicities, or contradictions with the laws of the country and religious teachings will not be disclosed