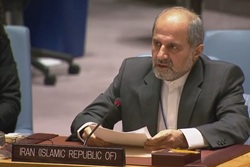 Iran's Ambassador and Deputy Permanent Representative to the UN Eshaq Al-e Habib denounced the deteriorating humanitarian situation in Palestine, and blamed the US for rendering the UN ineffective in supporting the rights of the Palestinians in the face of crimes committed by Israel.

Addressing the United Nations Security Council meeting on the situation in the Middle East, including the Palestinian question, Al-e Habib said, “Now the only option is to put an end to such impunity through holding Israel accountable for their crimes against the Palestinians.”

He added, “This can ensure the application of law and deter its future violation.”

“Welcoming Palestine for assuming chairmanship of Group of 77, we call for Palestine’s full membership in the UN,” he said.

Describing the situation in Palestine deteriorating, Al-e Habib said, “More than 295 Palestinian civilians were brutally killed and over 29,000 were injured by Israel.”

He regretted that “many of those killed and about 7,000 of those injured were under 18 years of age”.

“This proves that Israel is a child-killer regime,” he underlined, adding, “This is a clear manifestation of war crimes and crime against humanity.”

The Iranian diplomat also regretted that in 2018, more Palestinian homes were demolished and more illegal Israeli settlements were built, which according to him amounted to “the blatant violation of international law”.

“Last year, Israel also aggravated its decade-long illegal inhumane blockade on Gaza, the continuation of which will drastically deteriorate the already grave humanitarian situation,” he added.

He denounced enacting a law to ensure Jewish supremacy over others by Tel Aviv, adding that with the move Israel legalized racism.

“Very recently, it inaugurated an apartheid highway that features a large concrete wall, one side of which is open to Israeli vehicles only and the other side to Palestinian vehicles only. Not surprising!”

“Racism is in the very nature of the Israeli regime,” he lashed out at Israel’s foundation, adding, “First, they constructed a racial segregation wall, then enacted a racial discrimination law, and have now constructed an apartheid highway.”

“Extremely shameful! This must be condemned in the strongest possible terms,” he called for global condemnation of Israeli moves against the people of Palestine.

“We should also strongly reject and condemn the recognition of Al-Quds Al-Sharif as the Israeli capital, as well as the continued occupation of parts of Lebanon and the Syrian Golan by Israel,” Ale Habib said touching upon the US move of its embassy to Jerusalem al-Quds.

He described the US government moves as material breaches of international law and the relevant resolutions of this Council and the UNGA.

He then said, “Last but not the least, let s revisit the main question: why has the systematic violation of Palestinians’ inherent rights continued unabated over the past 70 years?”

“It is simple: through shielding Israel, the US has rendered this Council absolutely ineffective, with respect to Israel,” he said that Washington’s strong support for Tel Aviv has made it possible for Israel to ignore the rights of Palestinians.

“Consequently, Israel has been emboldened by impunity. Instead of facing punishment, it has been rewarded to continuously and brazenly commit all international crimes,” he regretted.

“That’s why, during its short life span, Israel has waged over 15 wars; occupied territories of Arab countries; invaded all of its neighbors, without exception; attacked other countries in the region and beyond from the Middle East to Africa; possessed all types of weapons of mass destruction; and the list goes on,” the diplomat expounded on Israeli hostile policies since its foundation in mid-20th century.

“In recent years, Israel has repeatedly attacked regional countries and brazenly assumed responsibility,” he said, elaborating on his argument that the UN and other international entities have become ineffective in countering with state crimes of Israel, adding, “What action did this Council take against such a material breach of the UN Charter?”

In a related front on December 22, Iranian Parliament Speaker Ali Larijani said the criminal acts of Israel against Palestinians must be heard by the entire world, denouncing the brutalities of Tel Aviv to crack down on the oppressed Palestinian nation.

“Supporting the deprived people of Palestine is a responsibility for every conscientious human,” Larijani said in a meeting with a visiting group of Palestinian MPs.

Referring to the crimes committed by the “Zionist regime”, especially in the Gaza Strip, Larijani pointed out "the criminal acts of this regime must be heard by the entire world.”

He said disclosing and revealing the regime’s crimes against the deprived people of Palestine will provide more support to the Palestinian cause.

“I hope that all regional countries and the whole world would further increase their support for Palestinian resistance in order for them to be strengthened,” the Iranian top legislator undermined.

"Iran's stances at the United Nations on US-drafted anti-Palestinian resolutions is also praiseworthy," al-Zahar pointed out.

At the end of the meeting, the head of the Palestinian parliamentary group invited Larijani to visit the Gaza Strip.

Earlier on December 4, Advisor to the Iranian Parliament Speaker Hossein Amir Abdollahian said that the democratic solution to the Palestinian issue is a Palestinian referendum with participation of native population, rejecting any place for Zionists in Palestine’s future.

As the Secretary General of the International Conference on Supporting Palestinian Intifada (Uprising), Amir Abdollahian hailed the resistance of Palestinians against Israel's brutal killing and kidnapping of Palestinians.

“A Palestinian referendum with participation of original inhabitants of Palestine, including Muslims, Jews and Christians, is a democratic solution to the Palestinian issue,” he said in a meeting with the representative of Palestinians resistance group, Hamas, Khaled Ghadoomi in Tehran.

He further noted that the Palestinians’ right to self-determination, an immediate halt to Jewish settlements and Zionist regime's aggression, and the return of the refugees to their motherland should be taken into account by the United Nations.

Ghadoomi, for his part, expressed his appreciation to the recent stances of Iran’s Leader on supporting the Palestinian people, quoting some of Ayatollah Khamenei's remarks as saying “according to the Leader, in the recent Zionist regime's war against the Palestinians, after 2 days, they suffered a crushing defeat, indicating the growing weakness of the Zionist regime."

Ghadoomi further said that the recent defeat of the Zionist regime was obtained as a result of the Palestinian Resistance movement, adding that Resistance and its firm stance is a serious challenge for the Zionists.

He went on to condemn the approach of the US and its allies in the region.

Earlier in July, Supreme Leader of the Islamic Revolution Ayatollah Seyed Ali Khamenei underlined that the US and Israeli plots to judaize the Palestinian lands and implement Trump's Deal of Century plan are just a dream that will never come true.

"Judaization of Palestine is a disturbed dream. Neither that nor the Deal of Century will come true," Ayatollah Khamenei said.

Ayatollah Khamenei had stated similar remarks a week before that, when he underlined that the US dreams to implement the 'deal of the century' plot in the Palestinian territories would never come true, stressing that Quds would remain the Palestinians' capital forever.

"Now, the Americans have named their satanic policy on Palestine as the deal of the century and with God's help, this deal of the century will never be materialized and despite the American statesmen's desire, the Palestinian issue will not be forgotten and Quds will remain as the Palestinians' capital," Ayatollah Khamenei said, addressing officials of the Hajj and Pilgrimage Organization in Tehran.

According to Fars News Agancy, he blasted certain Muslim governments for assisting Washington in implementing its plots against the region, and said, "The Islamic Ummah and the Palestinian nation will gain victory against their enemies and will see the day when the fake Zionist regime will be uprooted in the Palestinian territories."

Also, in September 2015, Ayatollah Khamenei described Israel as a "fake" regime, and said there would not be any Israel in 25 years from now.

"Some of the Zionists have said that given the results of the nuclear negotiations (between Tehran and the world powers), they have been relieved of concerns about Iran for 25 years, but we tell them that basically, you will not see the next 25 years and with God's grace, nothing under the name of the Zionist regime will exist in the region by then," Ayatollah Khamenei said, addressing a large number of Iranians in Tehran.

He added that the heroic spirit and morale of Muslim fighters would not let the Zionists feel comfort and tranquility in the next 25 years.

Elsewhere, Ayatollah Khamenei warned of the US endless enmity towards the Iranian nation, and said even after the nuclear agreement, whose fate is not yet clear in Iran and the US, the Americans have been hatching plots and approving a bill in the congress against Iran.

He described national might as the only way to end the US plots, and said a strong economy, growing scientific progress and maintaining and reinvigorating the revolutionary spirit and morale of the people, especially the youth, are among ways to boost national might and power.

Ayatollah Khamenei reiterated the need for vigilance against the US plots to influence Iran, and said Tehran had only entered negotiations with Washington just on the nuclear issue "and we will not negotiate with the US in other fields".

Tags: Iran Palestinian Israel Ayatollah Khamenei US
Short Link rasanews.ir/201rHI
Share
0
Please type in your comments in English.
The comments that contain insults or libel to individuals, ethnicities, or contradictions with the laws of the country and religious teachings will not be disclosed