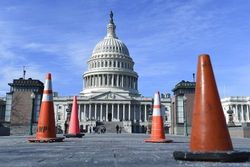 The United States entered the second month of a partial government shutdown on Tuesday over Congress’ failure to approve a budget to fund several federal agencies, with no quick end in sight to the historic crisis weighing on the nation's economy and morale.

RNA - Since December 22, a quarter of the US government has been closed because of an impasse between opposition Democratic Party lawmakers and the Republican administration of President Donald Trump over funding for a wall at the border with Mexico to block illegal immigration.

Trump refuses to endorse a budget that does not contain $5.7 billion to build the barrier, a key promise of his 2016 election campaign.

Democrats oppose the wall, calling it "immoral," costly and ineffective. They want the government reopened before any discussion of the matter.

Trump made a new proposal on Saturday which he said aimed to end the shutdown It offered to extend temporary protection to about a million immigrants facing expulsion, in return for the $5.7 billion he has requested.

Although it was rejected by Democrats – and even by some anti-immigrant voices – the offer could serve as a basis for new discussions.

The partial government closure has directly affects 0.5 percent of the US labor force but has started to indirectly hit the confidence of more than half of consumers, according to a survey by the University of Michigan.

According to Press TV, experts say it is also pressuring the world's largest economy, against the backdrop of already slowing global growth.

In the most sensitive government agencies, including the Departments of State, Homeland Security and Transportation, the number of affected employees has been kept to a minimum.

But elsewhere, the impact is clear. National Parks no longer have security guards, numerous museums are shut, and some airport security checkpoints have been closed.

About 800,000 federal workers, from FBI agents to scientists and some food inspectors, are furloughed or working without pay while trying to meet their financial obligations.

The affected federal employees will eventually get backpay but more than one million contractors for the government don't even have that to hope for.

"I'm about to lose my Medicaid, my car insurance" and driver's license, said Yvette Hicks, 40, a contractor with the Smithsonian museum complex. The single mother of two added: "Right now, this shutdown is really destroying me and my family."

The longest shutdown in US history is also beginning to have a political price. A majority of Americans hold Trump and his fellow Republicans in Congress responsible, according to several polls.

Tags: US government shutdown crisis Trump
Short Link rasanews.ir/201rH7
Share
0
Please type in your comments in English.
The comments that contain insults or libel to individuals, ethnicities, or contradictions with the laws of the country and religious teachings will not be disclosed