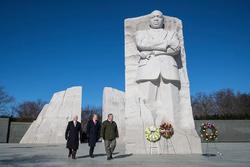 RNA - The president himself was slammed for making a very short stop at the MLK memorial in West Potomac Park, Washington, DC. While many expected the president to give a speech, he only exchanged a few pleasantries with reporters.

“Good morning everybody, it’s a great day, it’s a beautiful day and thank you for being here, appreciate it,” he said before going back to the White House.

The president later on posted a tweet to mark the occasion.

“Today we celebrate Dr. Martin Luther King, Jr. for standing up for the self-evident truth Americans hold so dear, that no matter what the color of our skin or the place of our birth, we are all created equal by God. #MLKDay,” he wrote.

Vice President Mike Pence also prompted heavy criticism on Monday, after attempting to use the occasion to promote his boss’ controversial wall on the border with Mexico and justify an almost one-month-long shutdown of the federal government over its funding.

Speaking to MSNBC, Pence said Trump’s insistence on funding the border wall was the only way to end the shutdown.

"One of my favorite quotes from Dr. King was 'now is the time to make real the promises of democracy.' You think of how he changed America," Pence said.

"He inspired us to change through the legislative process to become a more perfect union. That's exactly what President Trump is calling on the Congress to do: Come to the table in a spirit of good faith. We'll secure our border, we'll reopen our government," the VP added.

The longest ever shutdown in US history began on December 22, after Democrats refused to include the $5.7 billion Trump had requested for the wall in next year’s budget.

Trump believes that the wall is the only “real” way of blocking an influx of drugs and illegal immigrants through the southern border.

The shutdown has left some 800,000 federal employees either furloughed or unpaid. They missed their first paycheck earlier this month.

'He built bridges not walls,' King’s son fires back

He said this year’s MLK Day was more special “because I wonder what my father would be thinking” of the current administration.

Trump has been accused of advocating bigoted policies on immigration and race relations both during campaign and after entering office.

The tribute did not go as planned.

According to Press TV, the MLK Day is observed on the third Monday of January each year, which is around King's birthday on January 15.

Luther King Jr. was born in 1929 and the campaign to make his birthday a national holiday began after his assassination in 1968.

However, various administrations ignored the plea until 1983, when then President Ronald Reagan agreed to sign the holiday into law. The first anniversary was observed three years later.

Tags: Trump US MLK
Short Link rasanews.ir/201rH5
Share
0
Please type in your comments in English.
The comments that contain insults or libel to individuals, ethnicities, or contradictions with the laws of the country and religious teachings will not be disclosed