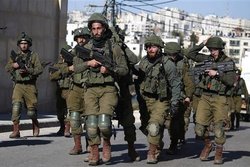 The Israeli Occupation Forces (IOF) shot and killed late Monday a Palestinian young man after an alleged stabbing attack near Hawara checkpoint in Nablus, to the North of West Bank.

Israeli forces, stationed at the checkpoint, opened fire at the young man who was later proclaimed dead, the sources added.

Israeli sources claimed that the slain Palestinian was trying to stab an Israeli soldier before another soldier opened fire at him. No Israelis were wounded in the alleged attack.

The area was later declared a closed zone where combing operations were carried out.

Tags: Israel Palestinian West Bank
Short Link rasanews.ir/201rH4
Share
0
Please type in your comments in English.
The comments that contain insults or libel to individuals, ethnicities, or contradictions with the laws of the country and religious teachings will not be disclosed