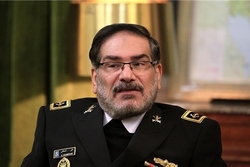 Secretary of Iran's Supreme National Security Council (SNSC) Ali Shamkhani lashed out at the US for its paradoxical attitude towards the ISIL, adding that Washington is keeping alive the terrorist group like a "weakened virus" for later use despite claiming to be in fight against it.

RNA - "The Americans' behavior in the so-called anti-ISIL coalition is dual," Shamkhani said on Monday.

He noted that a part of Eastern Euphrates region in Syria is still under the control of the US militarily, and said that the American forces are not willing to annihilate the ISIL in the region "because they feel that the weakened virus of ISIL can possibly be used in future for certain projects against Syria".

Shamkhani, meantime, underlined that Iran has helped Syria in the war against the ISIL and other terrorist groups at the invitation of the Damascus government and scored eye-catching success.

In relevant remarks earlier this month, a senior commander of Hashd al-Shaabi (Iraqi popular forces) had also said that the ISIL commanders were hiding at US bases at Iraq's border with Syria and warned that Washington sought to use the terrorists as a leverage against Baghdad and Damascus.

According to Fars News Agancy, the Arabic-language al-Ma'aloumeh news website quoted Hashem al-Moussavi as saying that a number of ISIL leaders were sheltered at Iraq's border with Syria to survive current attacks by the Iraqi security forces and Hashd al-Shaabi.

He added that Syria's al-Tanf base is the main stronghold of the terrorists and supplies the ISIL remnants with weapons, military equipment and intelligence, noting that Washington aims to use the ISIL commanders as a leverage to pressure Baghdad and Damascus.

Tags: Iran US ISIL
Short Link rasanews.ir/201rH3
Share
0
Please type in your comments in English.
The comments that contain insults or libel to individuals, ethnicities, or contradictions with the laws of the country and religious teachings will not be disclosed