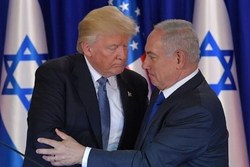 It’s a huge mistake to assume that the United States Agency for International Development (USAID) will ever fund all its projects in the occupied West Bank and the besieged Gaza Strip as it doesn't want to help exercise of Palestinian self-determination and sovereignty.

RNA - The US administration has already made the decision to cut funding to the Palestinians, and Dave Harden, former USAID Mission Director and Managing Director of the Georgetown Strategy Group, has already confirmed that.

Harden says Washington plans to shut down USAID and that the US administration "demonstrates again a lack of nuance, sophistication, and appreciation for the complexity of the situation.”

This should surprise no one, as President Trump says he will never endorse the idea of Palestinian “self-determination.” He won’t make genuine efforts to kick-start peace talks either.

He has already abandoned US support for the two-state solution, as giving the Palestinians self-determination would necessarily imply that they can establish an independent state on Palestinian soil. On the other hand, even if he does the impossible and endorses the idea, he will surely switch his stand the moment he feels like it.

Indeed, Trump has a history of self-contradictions and flip-flops. Since his election, Trump has switched his stands on everything from his signature Palestinian aid to the ongoing war on Syria. He has a way to go to before he matches the sheer volume of self-disagreement that he racked up prior to his election – and the Palestinian issue is not an exception:

Initially, Trump took hardline positions on Israel, refusing to condemn the expansion of illegal settlements in Palestinian lands, and then he moved the US Embassy from Tel Aviv to Jerusalem Al-Quds. Relocation of the embassy was controversial because both Israelis and Palestinians claim Jerusalem Al-Quds as their capital.

Trump now claims he wants to make peace in the long conflict the "ultimate deal." US administrations over the years have been stymied in similar goals. Peace talks have been at an impasse for several years. Both Trump and Netanyahu are eager to show an improved relationship following eight frosty years with the Obama presidency. But experts have also warned that Trump should be careful not to risk provoking Arab states, whom he needs as counterweight to Iran in Iraq and Syria.

The facts tell another story. The US is not an honest broker and has never sought to bring about peace in the Middle East, let alone in Palestine. The US supports Israel’s expansionist policies, including its illegal occupation and other violations of International Humanitarian Law. It supports Israel’s criminal policies financially, militarily, and diplomatically. The US also supports Saudi Arabia’s policies in the ongoing war on Yemen.

The Trump administration might state publically that it is opposed to Israel’s settlement policy and ostensibly “pressure” Tel Aviv to freeze colonization activities; yet it will never cut back financial or military aid to Israel, even if it defies International Law and continues settlement construction. That message is perfectly well understood by Tel Aviv, which continues its attacks on Gaza.

We can still remember vividly how both the US House of Representatives and the Senate passed resolutions openly declaring support for Israel’s war on Gaza, despite a constant stream of reports evidencing Israeli war crimes. On the same token the US reaffirms its “strong support for Israel in its battle with Hamas” - a war crime complicity under International Law.

When Israel waged a war to punish the defenseless civilian population of Gaza last year, its pilots flew US-made F-16 fighter-bombers and Apache helicopter gunships, dropping US-made bombs, including the use of banned munitions in violation of International Law.

According to Fars News Agancy, US diplomatic support for Israeli crimes includes its use of the veto power in the UN Security Council. When Israel was waging a devastating war against the civilian population and infrastructure of Lebanon in the summer of 2006, the US vetoed a cease-fire resolution. As Israel was waging war on Palestinian protesters last year, the US similarly delayed the passage of a resolution calling for an end to the violence.

Through its virtually unconditional support for Israel, the Trump administration had effectively blocked any steps to implement the two-state solution to the Israeli-Palestinian conflict. The so-called peace process has for many decades consisted of US and Israeli rejection of Palestinian self-determination and blocking of any viable Palestinian state. This year and the next, Trump will make sure this will continue to be the case under his presidency.

Hence, those that have long been thinking of a two-state solution to the Palestinian issue are apparently needed to get sober to realize that this is not, and has never been, a viable option. The international community should eventually come to realize that Israeli violence, brutality, aggression, crimes and occupation never end through diplomacy and civilized dialogue. Israel and its backers only believe in the barbaric rule of the jungle, so the international community should at least for once look at this problem through a pragmatic view. And it seems that the US policies in support of Israel, specially under Donald Trump, are ironically forcing the genuine advocates of the Palestinians' rights into an age of sobriety.

Tags: Trump US Palestine
Short Link rasanews.ir/201rGv
Share
0
Please type in your comments in English.
The comments that contain insults or libel to individuals, ethnicities, or contradictions with the laws of the country and religious teachings will not be disclosed