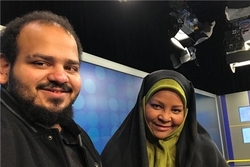 The third court session for jailed US-born Iranian TV anchor, Marzieh Hashemi, will be held on January 23 in Washington, the official website of the Islamic Republic of Iran Broadcasting (IRIB) reported Monday.

RNA - According to the IRIB World Service website, a US court in Washington, DC, will hold the third  hearing for Press TV’s anchor on Wednesday.

The report also said that Hashemi had been recently allowed to call her daughter for a second time.

“She had no information if any decision was made for her release (following the completion of her testimony),” her daughter said.

Family members say Hashemi, 59, was detained at St. Louis' Lambert International Airport on January 13 and then taken by the FBI to Washington.

On Saturday, a US federal judge said that the news presenter was testifying behind closed doors to a grand jury in Washington.

Judge Howell said Hashemi has not been charged with any crime, but has made two appearances in District Court, NPR reported. She is expected to be released when she completes her grand jury testimony.

Howell's order did not say when Hashemi might wrap up her testimony and gave no information on the case in which she was testifying.

However, Hashemi's lawyer, Preston Burton, said, "we expect that she will soon return to her family, her home, and her career."

Hashemi was born in New Orleans with the name Melanie Franklin. She married an Iranian man, converted to Islam, changed her name and moved to Iran in the 1980s. While she's unknown in the US, she's a prominent figure in Iran due to her position on state television. She's a citizen of both the US and Iran.

She traveled to the US to visit relatives and to shoot a documentary, according to Press TV, which spoke to her son Hossein Hashemi.

Tags: Marzieh Hashemi Press TV US
Short Link rasanews.ir/201rGn
Share
0
Please type in your comments in English.
The comments that contain insults or libel to individuals, ethnicities, or contradictions with the laws of the country and religious teachings will not be disclosed