Bahraini political prisoner may go blind over denial of treatment 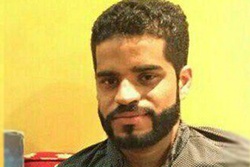 Bahraini activists say an imprisoned political dissident is at serious risk of losing his eyesight due to abuse and denial of medical treatment as the ruling Al Khalifah regime.

RNA - The Karrana Prisoners’ Commission stated on Sunday that the health condition of Salman Abdul Nabi Ibrahim, who has been sentenced to 95 years in jail and whose nationality has been revoked, is deteriorating, Arabic-language and independent Manama Post online newspaper reported.

The commission went on to say that the inmate is complaining of significant weakness in his eyesight after being severely beaten on the head during his torture at the notorious Jaw Prison.

It noted that the family of the Bahraini prisoner has repeatedly demanded prison officials to provide him with an ophthalmologist, but the requests have gone unanswered.

The family of Ibrahim, who was arrested during an anti-regime protest rally, is considering filing an appeal.

Tags: Bahrain Salman Abdul Nabi Ibrahim Al Khalifah regime Manama
Short Link rasanews.ir/201rGf
Share
0
Please type in your comments in English.
The comments that contain insults or libel to individuals, ethnicities, or contradictions with the laws of the country and religious teachings will not be disclosed