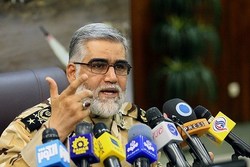 A senior Iranian military official warned that thousands of ISIL terrorists have been stationed in Afghanistan with the help of the US and certain regional states.

RNA - "The highest number, nearly 7,000, of ISIL terrorists, are deployed in Afghan territories and they supply their weapons with the Saudi and UAE money, and the Americans have kept them to be used as a pressure leverage against Iran, Russia and China," Head of Iran's Army Center for Strategic Studies Brigadier General Ahmad Reza Pourdastan said, addressing a ceremony in the Central city of Khansar on Friday.

He, meantime, underlined Iran's good intelligence superiority over the ISIL, saying, "Their location is clear to us."

"Enemies of the security and tranquility of the region in an organized move are after fomenting insecurity at the shared borders to transfer the defeated ISIL terrorists to Afghanistan and support the spread of Takfiri terrorism in the country to ignite the flames of war, bloodshed and insecurity in the region once again," Shamkhani said during the meeting in Kabul.

He cautioned that ignoring the threat could end up in re-experiencing the bitter incidents which happened in Iraq and Syria.

Also, last January, Supreme Leader of the Islamic Revolution Ayatollah Seyed Ali Khamenei expressed deep regret over the massacre of the Afghan people in terrorist attacks, blaming the US for the tragedies by transferring the ISIL terrorists to Afghanistan to guarantee its presence in the region.

According to Fars News Agancy, ayatollah Khamenei said that the US-backed terrorists don’t differentiate between the Shiites and Sunnis, and added, "The US wants this region not to see good days and wants the regional governments and nations to be busy with their own affairs so that they don’t think of opposing the evil agent of arrogant powers, that is Zionism."

Tags: Iran ISIL Afghanistan
Short Link rasanews.ir/201rGR
Share
0
Please type in your comments in English.
The comments that contain insults or libel to individuals, ethnicities, or contradictions with the laws of the country and religious teachings will not be disclosed