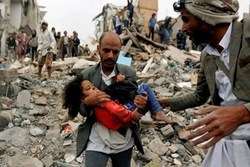 Yemeni officials have voiced concern over a UN mission’s ignorance of Saudi violations of the Hudaydah truce deal.

RNA - Yemen's Supreme Revolutionary Committee head Mohammed Ali al-Houthi highlighted the failure of the UN mission to support the Hudaydah Agreement (UNMHA) to hold the Saudis accountable after one of its own vehicles was targeted in the port city of Hudaydah.

The attack, which happened earlier on Thursday, caused no casualties. The UN declined to identify the party behind the shooting.

Al-Houthi believes Saudi-led forces were responsible for the attack and the UN's silence may indicate the monitoring mission is not prepared to carry out its duties correctly.

Al-Houthi suggested that the silence was more probably a case of the UN's intentional bias in favor of the Saudi-led forces.

Supreme Political Council member Mohammed al-Bukhaiti also echoed al-Houthi's comments, adding that the UNMHA chief monitor Patrick Cammaert has "sought to see the Stockholm agreement fail" ever since he was appointed to the mission.

"We will not accept dialogue around increasing the number of international monitors until the problem of Patrick Cammaert is resolved," said al-Bukhaiti.

Saree described the attacks as a blatant violation of the truce and urged UN monitors to hold the coalition accountable for the attack.

He further highlighted that vague responses from the UN only impeded the Yemeni military's right to retaliate.

Hudaydah, a lifeline for millions of Yemenis, has seen some of the heaviest fighting in the Saudi-led war, which Riyadh began in March 2015.

The war initially consisted of an aerial campaign, but was later coupled with a naval blockade and the deployment of ground mercenaries to Yemen.

Since the onset of the aggression, Yemeni forces, backed by Popular Committees fighters, have defended the impoverished nation.

The aggression is estimated to have taken the lives of 56,000 Yemenis and pushed another 14 million to the brink of famine in what the UN has described as the world's worst humanitarian crisis.

Tags: Yemen UN Hudaydah Saudi
Short Link rasanews.ir/201rGE
Share
0
Please type in your comments in English.
The comments that contain insults or libel to individuals, ethnicities, or contradictions with the laws of the country and religious teachings will not be disclosed