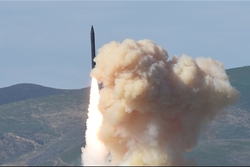 The future of bilateral nuclear deals between the US and Russia is in jeopardy, as both nations once again trade accusations that the other has violated existing deals, following a meeting in Geneva on the matter.

RNA - US officials once again declared Russia to be “in material breach” of the Intermediate-Range Nuclear Forces (INF) Treaty, based on the theoretical range of a Russian missile. Russia has denied the missile has a long enough range to be covered by INF, and has never tested it at such ranges. Russia fired back, saying that the US compliance with New START has problems, and that the US has refused to allow Russia to verify the conversion of some B-52H bombers and Trident II ballistic missile launchers for conventional weapons use.

- For obvious reasons, the US and Russia aren’t eager to offer one another the level of access needed to verify compliance with the letter of these treaties. Since this mistrust seems to be getting worse, not better, attempts to negotiate an extension of New START, or any other nuclear deals, will be in serious doubt.

- A hard-earned lesson of the Cold War is that arms control reduces the risk of nuclear war by limiting dangerous deployments and, even more important, by creating channels of communication and understanding. But President Donald Trump and his National Security Advisor John Bolton appear to have forgotten, or never learned, that lesson.

- Quite the opposite, Trump has announced an intent to withdraw from the INF Treaty. Secretary of State Mike Pompeo subsequently has stated that the US will suspend implementation of the Treaty.

- Agreed to in 1987 by the United States and the Soviet Union, the INF Treaty prohibits the two countries from deploying both nuclear and conventional missiles with ranges between 310 and 3420 miles. The main reason cited for withdrawal is that Russia has allegedly tested and deployed ground-launched cruise missiles the treaty prohibits. Russia denies that the missiles violate the Treaty and has made its own accusations, foremost that US ballistic missile defense launchers installed in Eastern Europe could be used to house treaty-prohibited cruise missiles.

- Although the Treaty is of vital importance for global stability, on December 21, the US opposed a Russia-sponsored UN General Assembly resolution calling for preservation of the Treaty and for the two countries to consult on compliance with its obligations.

- The INF Treaty remains a key element of the arms control framework limiting nuclear weapons and arms racing. Often forward deployed and intermingled with other forces, the missiles the Treaty prohibits are among the weapons most likely to lead to miscalculation or misadventure in a crisis.

- The Treaty highlights, “the ethical imperative” to achieve a nuclear weapons free world. The Treaty is designed to stimulate, support, and advance humanity’s quest for the security of a nuclear free world. Obviously, more work is needed, rather than only criticizing that the Treaty does not do everything at once.

With tensions growing among nuclear-armed countries in potential flashpoints from Ukraine to the South China Sea, it is long past time to rebuild the capacity of the US government to negotiate with its nuclear-armed adversaries. The best course would be to use the dispute over the INF Treaty as a moment to renew the negotiating frameworks and institutions in order to avoid catastrophe in these dangerous times.

According to Fars News Agancy, the problem is that Trump has expressed general hostility to any international obligation that might limit US use of force or military capabilities. He sees negotiations as a zero-sum game to be won or lost. He doesn’t seem capable of imagining international agreements that benefit all parties and make the world a safer place.

In the prevailing environment, the UN must act and leave space for future diplomacy. Indeed, there is a legitimate question as to whether it is legal under international law for the US to withdraw from a UN-ratified treaty. Despite Trump’s dangerous moves and hostility, the US and Russia can and should negotiate agreements like the INF Treaty to address the riskiest elements of their nuclear confrontation. The time to start building a climate for negotiations is now.

Indeed, it is time the US and Russia began to fulfill their disarmament duties by either joining the Ban Treaty and addressing its limitations of verification and other technical issues or move forward in the process of negotiating a comprehensive nuclear weapons convention. Sitting on their hands and offering no better way forward is inadequate and unacceptable as it is an issue of global security concern.

Tags: US Russia Disarmament UN
Short Link rasanews.ir/201rG7
Share
0
Please type in your comments in English.
The comments that contain insults or libel to individuals, ethnicities, or contradictions with the laws of the country and religious teachings will not be disclosed