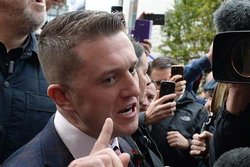 UK far-right activist and Islamophobe Tommy Robinson has been banned from making money on YouTube because he allegedly spread hate on the platform.

“We have suspended ads on Tommy Robinson’s YouTube channel as it breaches our advertising policies,” said the spokesperson.

The ban comes a day after the American video-sharing platform removed adverts from videos on Robinson’s page, saying they promoted “hatred, intolerance or discrimination”.

The move would be a serious blow to the Islamophobe figure whose channel has over 270,000 subscribers and enjoys high earnings from far-right viewers in Britain and elsewhere.

Robinson slammed the move and said it was “continued censorship”. He also claimed that Google, which owns YouTube, was planning to close down his account and ban him altogether.

Robinson’s page on YouTube has already been flagged fro allegedly violating rules on “hate speech or content that promotes or incites violence”. Among the videos spotted on the page is one from last year that includes footage of Robinson punching a migrant on a street in Italy.

Robinson has several criminal convictions in the UK and is free pending a ruling by the country’s attorney general on contempt of court charges. He has openly promoted hate against Muslims and other minority groups in Britain since he founded the English Defense League some 10 years ago.

Robinson has already been banned from major social media websites like Twitter while payment platform PayPal has also removed him from online transactions over his violation of rules on hate speech.

Tags: Islamophobe YouTube UK
Short Link rasanews.ir/201rG6
Share
0
Please type in your comments in English.
The comments that contain insults or libel to individuals, ethnicities, or contradictions with the laws of the country and religious teachings will not be disclosed