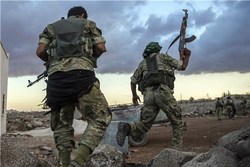 "The terrorists of Ajnad al-Qoqaz, Jeish al-Izzah and Islamic Turkistani Party are preparing for concurrent chemical attacks in Lattakia, Idlib, Aleppo and Hama by means of bombs and missiles armed with poisonous substances as well as drones," the source said.

He noted that the terrorist groups have sent 500 liters of chemical substances to Abu Dhuhur in Idlib and Halfaya in Northern Hama.

Also in the past 24 hours, the Syrian army warded off continued attacks of the terrorists on their military positions by pounding and destroying militants' movements in Northern Hama and Southeastern Idlib.

The Syrian Army's artillery and missile units pounded the movements and military positions of Jeish al-Izza terrorists who were trying to penetrate into Syrian Army positions in Northern Hama and Southeastern Idlib from al-Lahaya and al-Latamanieh towns, destroying several military positions and inflicting heavy losses and casualties on the militants.

The Syrian Army's artillery units pounded militants' movements in the villages of al-Zayareh, al-Zaka and Lahaya in Northern and Northwestern Hama, killing a large number of terrorists and destroying their military equipment and weapons.

Also on Wednesday, a senior official of the People's Protection Units (YPG) underlined that the Kurds are opposed to the establishment of a safe zone in Northern Syria to be controlled by Turkey.

"It should first be clear who is a threat and the security of which side should be protected to create a safe zone," Aldar Khalil, the head of YPG's diplomatic relations committee, told the Kurdish-language Hawar news.

He added that if the safe zone is meant to establish security in Northern Syria and protect the region against Turkish threats, it is a good policy.

"We are opposed to the creation of a safe zone under the control and supervision of Turkey in Northern and Northeastern Syria," he underlined.

A huge explosion at the center of Manbij in Northeastern Aleppo killed and wounded over 30 people, including several US soldiers.

The Kurdish-language Hawar news reported on Wednesday that the explosion occurred in Kasr al-Umara restaurant at Sondos street, killing at least 10 people, including members of Manbij military council.

It added that two US soldiers were also killed and two others were wounded.

Meantime, some field sources reported that 5 US forces have been killed in the attack which was a suicide blast.

Eyewitnesses in Manbij told the Arabic-language service of Sputnik that leaders of the local military council and an unnamed delegation were at the site of the blast.

According to them, the explosion took place near a cafe where the leaders of the council and guests from the delegation, "whose identity has not yet been established", had gathered.

Other sources also reported that 20 people were wounded in the blast.

According to the Sputnik, the ISIL terrorist group has reportedly claimed responsibility for the explosion.

Differences intensified between the militant groups backed by the US and civilians in Eastern Syria as massive military operations by Turkish Army are imminent.

The Syrian media activists reported that the Syrian Democratic Forces (SDF) have arrested a large number of people in areas under their control in Hasaka, Raqqa and Deir Ezzur provinces with the aim of forced recruiting of conscripts.

The activists said the SDF move has angered the local population, intensifying unrests in the region. "In one of such cases, civilians torched an SDF military base in the town of al-Qahtanieh in Northeastern Hasaka," they said.

The Turkish-language Yeni Shafaq newspaper, meantime, pointed to the Turkish Army's full preparedness to launch military operations in Eastern Euphrates, and said, "A total number of 80,000 Turkish Army soldiers are ready to take part in the upcoming assault on the Kurdish forces."

Over 30,000 Iraqi Army troops backed by the Russian Air Force lined up for launching joint military operations with the Syrian Army against the remnants of the ISIL terrorist group in Eastern Syria, an Arab media report said.

The Iraqi Army troops are standing orders to join the Syrian Army for an imminent battle against the ISIL along Iraq-Syria borders, Al-Etejah Press quoted an Iraqi military source as saying on Wednesday.

The source said over 30,000 Iraqi soldiers are now behind the borderline in order to enter Syria's Eastern deserts (Badiyeh) and engage in battle with remaining ISIL terrorists along the border.

He noted that the military operations will soon start, and said the Syrian and Iraqi governments have done the needed coordination to launch the joint assault on ISIL in cooperation with the Russian Air Fore.

Tags: Syria Idlib Terrorist
Short Link rasanews.ir/201rG1
Share
0
Please type in your comments in English.
The comments that contain insults or libel to individuals, ethnicities, or contradictions with the laws of the country and religious teachings will not be disclosed