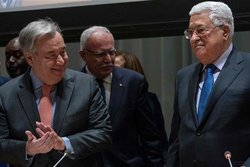 Palestinian President Mahmoud Abbas has denounced Israel’s occupation of the Palestinian territories, as he assumes the chairmanship of the largest bloc of countries at the United Nations.

Abbas made the remarks at a ceremony marking the handover of the chair of the Group of 77 (G77) from Egypt to Palestine at the UN headquarters on Tuesday.

I congratulate the State of Palestine as this year’s chair of the G77 and China, and I thank the Egyptian Presidency for its leadership in 2018. The G77 is a central force pushing for multilateral solutions to global challenges. https://t.co/RTwt4F09vi

The Group of 77, a coalition of 134 mainly developing countries and China, was founded in 1964. It initially had 77 members, but currently represents some 80 percent of the world’s population.

At his Tuesday's speech, Abbas blasted Israel for hampering the development in the Middle East through its occupation policy.

“Israel’s continued colonization and occupation of the State of Palestine undermines our development and capacity for cooperation, coordination and obstructs the cohesive future development of all peoples of the region,” he said.

Abbas also stressed his commitment to a “peaceful solution” to the decades-long Israeli-Palestinian conflict, which “brings an end to the occupation and the realization of the independence of the state of Palestine with East Jerusalem [al-Quds] as its capital.”

The Palestinian president further condemned the scourge of terrorism “in all its forms, colors, and types” regardless of who perpetrates it.

“Terrorism takes place worldwide on a daily basis. It is an epidemic and I therefore call on all countries of the world to cooperate, to put an end to terrorism, to uproot it,” he added.

Foreign Minister Riyad al-Maliki announced that Palestine is consulting with the UN Security Council member states about its membership bid despite the US threat to veto the measure.

“The moment we conclude the process, we will present the application,” he told US television network CBS.

Moreover, Saeb Erekat, the secretary general of the Palestine Liberation Organization (PLO), described the Palestinians’ chairmanship of the G77 as a “historic step that was made by the sacrifices of our people and their long struggle for freedom.”

According to Press TV, the move, he added, “signifies the recognition of the international community of Palestinian statehood and our right to self-determination. Despite the reality under Israel’s military occupation, Palestine can play a significant role within the global system. The Palestinian people have a tremendous potential to share with the rest of the international community.”

Since then, the Palestinians have joined dozens of international organizations and agreements as part of a campaign to garner support for the recognition of their homeland as a sovereign state.

Last October, the General Assembly voted to temporarily elevate Palestine’ status at the UN so that it could take over the rotating chairmanship of the G77 for 2019.

Tags: Mahmoud Abbas UN Palestine Israel
Short Link rasanews.ir/201rFq
Share
0
Please type in your comments in English.
The comments that contain insults or libel to individuals, ethnicities, or contradictions with the laws of the country and religious teachings will not be disclosed