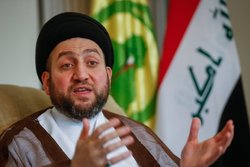 Leader of the National Wisdom Movement of Iraq Ammar al-Hakim, in a meeting with Iranian Foreign Minister Mohammad Javad Zarif, denounced the US’ unilateral sanctions against Iran, and said that Washington’s pressures make Baghdad more resolute to cement ties with Tehran.

RNA - Ammar al-Hakim said on Sunday that the US unilateral sanctions against Iran make Iraq all the more determined to develop relations with the Islamic Republic.

The Iraqi politician made the remarks in a meeting with visiting Iranian Foreign Minister Zarif and his accompanying delegation in Baghdad.

The imposition of unilateral sanctions by the US is an unprecedented move in international interactions, he said, adding “Iran has always supported Iraq, and as such, we oppose and condemn the sanctions.”

He then maintained that the withdrawal of American troops from Syria, although happening very slowly, is still a key factor of change in the region and will have a positive impact on Syria’s development.

The Iranian top diplomat, for his part, commended the religious and political authorities of Iraq, including Hakim, for their role in establishing security and stability in Iraq and preserving the country’s territorial integrity.

Earlier on Saturday, Iranian Foreign Ministry Spokesman Bahram Qassemi announced that a large economic delegation will accompany the top diplomat in this visit.

Qassemi said that CEOs of dozens of entrepreneur companies will accompany the foreign minister on this visit.

In a related front, Iraqi Prime Minister Adil Abdul-Mahdi said that his country is enjoying friendly and close ties with Tehran, adding that Baghdad is focused on its commonalities with neighboring countries, including Iran.

Abdul-Mahdi highlighted the close and amicable relations with Iran, saying his government believes in focusing on commonalities in its interactions with neighbors.

He made the remark in response to a question about Iran and Iraq’s relations during his term in office in his weekly press conference on last Tuesday.

“In our engagement with neighbors, our emphasis is on working together on commonalities, and through this way, we can gradually resolve disputes with confidence and goodwill,” he added.

Elsewhere, he stressed that all developments happening on shared borders with Syria, as well as ISIL activities, are under his government’s constant watch, adding that Iraq is in contact with Syria, Turkey and the international coalition in this regard.

Tags: Ammar al-Hakim US Iran
Short Link rasanews.ir/201rFT
Share
0
Please type in your comments in English.
The comments that contain insults or libel to individuals, ethnicities, or contradictions with the laws of the country and religious teachings will not be disclosed