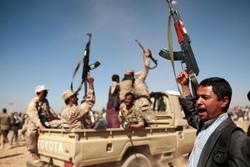 A new draft resolution making its way to the UN Security Council can and should establish a long-term Yemen ceasefire monitoring mission.

RNA - The resolution is expected to be voted on next week and it shouldn’t fail. A previous resolution from December 21 established a small monitoring team for 30 days. About 20 monitors are in place now. Under the new plan, up to 75 monitors could be sent. The initial period would be six months, and the resolution makes room for extensions.

And why not. The new mission should also monitor Saudi-led troop redeployment and air strikes to help provide security for three ports within the ceasefire area, including the main Hodeida aid port.

According to the Food Security Information Network (FSIN), there is an increasing risk of famine across Yemen. The FSIN says food crisis has notably deteriorated, adding that conditions will further worsen because of the Saudi-led war, drought, macro-economic collapse, and blockade. The FSIN, which is co-sponsored by the United Nations food agency, the World Food Program, and the International Food Policy Research Institute, says there is a growing demand for humanitarian aid.

On the fourth year of the illegal Saudi offensive, the UN International Children’s Emergency Fund also reports that over 17 million people, which equals to 65 percent of all Yemeni households, are food insecure, meaning that they cannot afford feeding themselves and their children adequately.

Anyone at the UN whose major concern is the sanctity of human life is in effect, by leaving Saudi-led, US-backed war crimes unchecked, ensuring death by famine in Yemen. This dirty war is pitiless, and if the international civil society itself does not stop the Saudi-led violence and war crimes through this new resolution, then it will be complicit.

According to Fars News Agancy, the problem of Yemen is exacerbated by Western governments’ control of the “fakestream” media. This runs counter to their obligation to promote truth, independence in the media, regional peace, and global security. The biggest problem is the lack of information of the real situation on the ground and the fact that many journalists avoid speaking out because they fear retaliation from their governments which are arming and supporting the Saudi-led campaign.

Nonetheless, the international civil society cannot and should never stomach these crimes without offering resistance. Resistance is what has animated Yemen for the past four years, and pushed a nation on the brink, to manifest a movement that saw the bending of the might of Saudis and their allies.

Mind you, it is not the first time that a minority has come to overpower the multitude majority: Syria comes to mind. Just like in Yemen, the cabal of US invaders led by the Saudi allies chose to invade Syria too - with a helping hand from militant proxies. The regime changers loudly posit that their war on Syria – just like their war on Yemen - is righteous and fair.

It is not. The world community center has decided to frown before the slaughtering of a nation whose crime is to argue political self-determination in the face of Saudi Arabia’s grand Wahhabist complex and America’s Christian-Zionist colonial campaign. The world is in the know that the Saudis and the Americans cannot have a war on terrorism when their own war against Yemen is terrorism. Those who are going to vote next week at the UN should take note: The besieged people of Yemen need a long-term ceasefire monitoring mission and then an end to the Saudi war, not just for six months but forever. And the first thing to note in the Yemen war is the Saudi airstrikes.

Tags: UN Yemen Saudi
Short Link rasanews.ir/201rFG
Share
0
Please type in your comments in English.
The comments that contain insults or libel to individuals, ethnicities, or contradictions with the laws of the country and religious teachings will not be disclosed