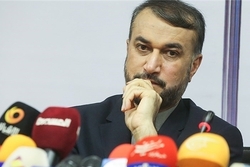 Advisor to the Iranian Parliament Speaker Hossein Amir Abdollahian, in a meeting with senior member of the Foreign Policy Committee of the Iraqi Parliament Mohammed Salem al-Ghabban, reassured that Tehran is highly supportive of peace and stability in the Arab country.

RNA - Amir Abdollahian offered his congratulations to al-Ghabban, who formerly served as Iraqi interior minister, on the opening of the Iraqi parliament and formation of the new government in the Arab country, stressing the need to further expand bilateral cooperation between Iran and Iraq in various fields, especially in the parliamentary area.

He added that Tehran and Baghdad's relations remain solid and strategic.

"We consider Iraq's security as the security of the Islamic Republic of Iran and the region, while we consider the US interventionist policies in the region to be in contradiction with stability and security [in the region]," the special assistant to the speaker of the Iranian parliament for international affairs added.

He pointed out that the Iraqi people and leaders acted with power and wisdom in fighting terrorism and preserving the independence and territorial integrity of the country.

Mohammad al-Ghabban, for his part, expressed his satisfaction with the strong and brotherly relations between the two countries of Iran and Iraq. He also expressed his appreciation for Iran’s support for Iraq.

The Iraqi lawmaker said that the Iraqi government and parliament are advancing on the path to development, stability and security of the country and the region.

Also in the meeting, the two sides discussed and exchanged views on the latest regional and international developments as well as bilateral issues in the political arena. They also attached great importance to regional cooperation between the two countries.

In a related front, Iranian Foreign Minister Mohammad Javad Zarif is slated to visit Iraqi capital city of Baghdad today, at the head of a high-ranking big politico-economic delegation.

Last week, Iraqi Prime Minister Adil Abdul-Mahdi said that his country is enjoying friendly and close ties with Tehran, adding that Baghdad is focused on its commonalities with neighboring countries, including Iran.

Abdul-Mahdi highlighted the close and amicable relations with Iran, saying his government believes in focusing on commonalities in its interactions with neighbors.

He made the remark in response to a question about Iran and Iraq’s relations during his term in office in his weekly press conference on Tuesday.

“In our engagement with neighbors, our emphasis is on working together on commonalities, and through this way, we can gradually resolve disputes with confidence and goodwill,” he added.

Elsewhere, he stressed that all developments happening on shared borders with Syria, as well as ISIL activities, are under his government’s constant watch, adding that Iraq is in contact with Syria, Turkey and the international coalition in this regard.

According to Fars News Agancy, the Islamic Republic of Iran is ready to participate in reconstruction of Iraq, in particular, in infrastructural projects, Ardakanian told reporters upon arrival in the Iraqi capital, Baghdad on Wednesday.

Tags: Hossein Amir Abdollahian Iran Iraq
Short Link rasanews.ir/201rFA
Share
0
Please type in your comments in English.
The comments that contain insults or libel to individuals, ethnicities, or contradictions with the laws of the country and religious teachings will not be disclosed