US Not Making Top 20 on Global Democracy Index 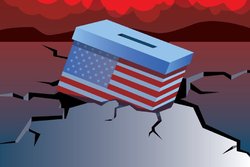 The United States, which claims to be a flag-holder of democracy in the world, is a nation classified "flawed democracy" in a new democracy index.

RNA - According to the 2018 edition of The Economist Intelligence Unit's Democracy Index, the US doesn't even make the list of top 20 with its demonstrably "flawed democracy", notching it the 25th spot. The ranking is based on 60 indicators spanning five interrelated categories: electoral process and pluralism; civil liberties; the functioning of government; political participation; and political culture.

Twenty countries (12 percent) were designated as full democracies, 14 of which are located in Western Europe. That the US index didn’t improve this year is not surprising:

- Instead of leading the US away from its worst impulses, such as protecting refugees and lifting Muslim travel ban, President Donald Trump’s demands for a wall on the US southern border look to be leaning closer to the autocratic acts and optics of tyrannical regimes. He refuses to restore America to normalcy and despite national disagreements and international criticisms, the fierce tyrant continues his anti-immigrant policies and vehement demands.

- The US continues to dehumanize and incarcerate Muslims, Black and brown people to justify systematic violence, racism and injustice. That oppression has lived in the racist polemics of the nation’s most prominent politicians as well. The Trump administration continues to offend Muslims and immigrants, and weaponize words socially and politically to secure white supremacy and to uphold Christian-Zionist dominance. These tools build a foundation of inequality that undermines the US as a democratic nation. These weapons and falsehoods are not new and neither is the resistance against them.

- The US foreign policy establishment’s hypocrisy and tough-guy-interventionist attitude knows no bounds. The disastrous interventions in Syria and Yemen are aimless, dangerous and lack any legality. Afghanistan is an unwinnable war too and about to end in outright military defeat. Ending these failed wars and getting out now ought to be a progressive dream. The problem is American pundits and politicians are not willing to extract the occupying troops from these Mideast quagmires.

- With near-trillion-dollar military budget, and the endless and needless wars it funds, the war-friendly US foreign policy establishment cannot envision a sane tomorrow for humanity. The naked truth is that Washington is not in the mood to take on militarism and war, as it will upset the Military-Industrial Complex and allied despot regimes in the Middle East.

- Separating thousands of migrant children from their families and locking them up in tents and detention centers for months on end has been one of the most disastrous policies of the Trump administration responding to children and families seeking safety at the US border. The United Nations Human Rights Council is yet to demand an end to children’s detention and hold the US government to account for its policies of cruelty and stigmatization of asylum seekers and refugees.

- The US and its allied partners turned Afghanistan, Iraq, Syria and Yemen into failed states. It is deplorable that they continue to ignore their responsibility of carrying out any meaningful investigations into the hundreds of thousands of civilian deaths they caused and/or any responsibility to help rebuild these war-torn nations. They are unashamedly ignoring the devastating legacy of their bombing campaigns and airstrikes on the pretext of establishing democracy in these unfortunate nations, adding insult to injury by making clear that they have no intention of helping to rebuild them or offering survivors any form of remedy and compensation.

So, there is no cause for the US government to celebrate in any way, much less invade and “democratize” other sovereign nations in the Middle East and beyond. In the current circumstances, expect the US Democracy Index to decline even further, and national disillusionment with the functioning of government to continue as will a decline in democratic institutions, civil liberties, and antiwar campaigns.

Tags: US Democracy foreign policy
Short Link rasanews.ir/201rEy
Share
0
Please type in your comments in English.
The comments that contain insults or libel to individuals, ethnicities, or contradictions with the laws of the country and religious teachings will not be disclosed