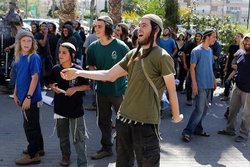 Israeli officials have handed down orders to five Palestinian families residing inside a building in occupied East Jerusalem al-Quds to evacuate their homes by the end of the month.

RNA - The Civic Coalition for Palestinian Rights in Jerusalem (CCPRJ) said on Saturday that Israel’s so-called Law Enforcement Department had given the order to the Sabbagh family to leave the building in the Sheikh Jarrah neighborhood of occupied East Jerusalem al-Quds, and turn it over to the extremist settlers who had claimed its ownership by January 23.

Established in 2005, the CCPRJ is a Palestinian non-governmental organization that aims to contribute to effective mobilization and cooperation of civil society vis-à-vis Israeli policies undermining Palestinian rights in occupied East Jerusalem al-Quds.

In 2012, the Sabbagh family lodged a lawsuit at the Israeli District Court in Jerusalem al-Quds against the Israeli settlers' claim that they owned the land in question.

Even though the family provided the court with conclusive evidence proving ownership of the land and that Israeli setters’ land registration process done in 1972 was illegal, the court ruled in favor of the settlers.

The family appealed the decision to the High Court on November 15, 2018, and requested to open the file of land ownership. However, the High Court rejected the appeal and upheld the District Court’s decision.

The family, through its lawyers, then re-appealed against the High Court’s ruling through asking for a five-judge panel instead of three. The attempt failed as well, which left the eviction of the five families imminent.

Trump backtracked on Washington’s support for a “two-state solution two years ago, saying he would support any solution favored by both sides.

“Looking at two-state or one-state, I like the one that both parties like. I’m very happy with the one both parties like. I can live with either one,” the US president said during a joint press conference with Israeli Prime Minister Benjamin Netanyahu in Washington in February 2017.

Palestinian laid to rest in Gaza

Meanwhile, Palestinians on Saturday held a funeral procession for a woman killed by Israeli forces in Gaza.

Israeli forces killed the Palestinian woman, Aml Moustafa Ahmed, 43,  and injured at least 25 people during protests along the border between the besieged Gaza Strip and the occupied territories on Friday.

Tensions have been running high near the fence separating Gaza from the occupied territories since March 30, which marked the start of the protests.

According to Press TV, Palestinian protesters demand the right to return for those driven out of their homeland.

More than 240 Palestinians have so far been killed and over 20,000 others wounded in the renewed Gaza clashes, according to the latest figures released by the Gaza Health Ministry.

Tags: Israel Palestinian settler
Short Link rasanews.ir/201rEv
Share
0
Please type in your comments in English.
The comments that contain insults or libel to individuals, ethnicities, or contradictions with the laws of the country and religious teachings will not be disclosed