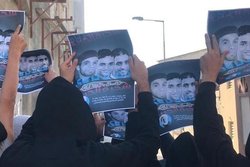 People in the tiny Persian Gulf kingdom of Bahrain have held anti-regime protests, expressing anger at crackdown on pro-democracy activists.

RNA - The protests coincided with US Secretary of State Mike Pompeo's visit to the kingdom as part of his tour of the Middle East aimed at coordinating an ‘anti-Iran campaign’.

The demonstrators in the villages of Diraz and al-Musalla honored those who lost their lives during the anti-regime protests and expressed their solidarity with the country's most prominent Shia cleric, Sheikh Isa Qassim.

In June 2016, Bahraini authorities revoked Sheikh Qassim's citizenship over accusations that he used his position to serve foreign interests and promote violence, a charge the clergymen strongly denies.

He has since been confined to house arrest, resulting in deterioration of his health condition.

In May 2017, a regime court convicted Sheikh Qassim of illegal collection of funds and money laundering, and sentenced him to one year in jail suspended for three years.

Last year, the cleric underwent surgeries in London. In December, he traveled to Iraq and is now believed to be there.

Also on Friday, the Bahraini people held protests in the villages of Abu Saiba and Shakhurah to denounce the Al Khalifah regime's crimes and voice their support for the Saudi Shias in the Qatif region.

Recently, Saudi forces conducted a deadly raid on Qatif, claiming that they were searching for a number of wanted people.

The protests were held as Pompeo arrived in the capital Manama.

Pompeo is on a Middle East tour, which has already taken him to Jordan, Iraq and Egypt. He is also set o visit travel to Saudi Arabia, Qatar, the United Arab Emirates, Oman and Kuwait.

In his meeting with Bahraini King Hamad bin Isa Al Khalifah, the US secretary of state called for enhanced cooperation between Washington and Mamma in all fields, especially in the political, economic and defense sectors.

"Bahrain is steadily moving forward on the right path to maintain its stability and the continuity of development and progress," Pompeo said.

Bahrain, a key US ally in the Persian Gulf region, hosts the US Navy's Fifth Fleet with some 7,800 US military personnel, as well as a British naval base.

Since February 2011, Bahraini people have been holding peaceful protest rallies regularly, demanding that the Al Khalifah family relinquish power and let a just system representing all Bahrainis be established.

According to Press TV, they have also been complaining against widespread discrimination against the Shia majority in the kingdom.

Manama has responded to the demonstrations with an iron fist. The authorities have detained rights campaigners, broken up major opposition political parties, revoked the nationality of several pro-democracy activists and deported those left stateless.

Bahrain's General Directorate of Anti-Corruption and Economic and Electronic Crimes said in a statement that the campaigner is serving a five-year sentence for "false" tweets that "do not fall within freedom of expression."

"Nabeel Rajab posted false and malicious tweets which do not fall within the freedom of expression," read the statement.

Tags: Bahrain Saudi Pompeo US
Short Link rasanews.ir/201rEp
Share
0
Please type in your comments in English.
The comments that contain insults or libel to individuals, ethnicities, or contradictions with the laws of the country and religious teachings will not be disclosed