US seeking to create chaos in Middle East 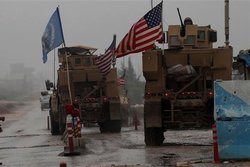 The United States has been trying to create chaos in the Middle East in order to keep its occupying forces in the region, says a commentator.

David Yaghoubian, professor of history at the CSU San Bernardino University, told Press TV that the US has been “waging war against Middle Eastern countries” in a bid to “bring about chaos” and weaken their resistance.

“Turning [the Middle East] into a cauldron basically means creating such chaos and destabilization that no Middle Eastern nation on its own will have the potential to resist American and or Israeli power,” Yaghoubian said.

“Through implementing a divide and rule strategy, the United States will be able to maintain its occupying forces and have a reason that it uses to legitimate this occupation,” the professor argued.

Tags: Iran Zarif US Syria
Short Link rasanews.ir/201rEd
Share
0
Please type in your comments in English.
The comments that contain insults or libel to individuals, ethnicities, or contradictions with the laws of the country and religious teachings will not be disclosed