Lebanon to lodge complaint with UNSC against Israeli 'border wall' 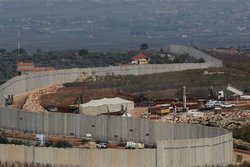 Lebanon says it will file a complaint with the UN Security Council against the Israeli regime’s violation of a number of points contested by Beirut, especially a wall it has built near the Lebanese border.

RNA - Lebanese officials said Thursday they would raise the issue of the wall with the United Nations Security Council and a top US diplomat.

The comments came after Tel Aviv placed 25 cement blocks near the illegal Israeli settlement of Miskaf Aam, opposite the Lebanese town of Adaisseh, with six blocks placed on disputed points. In response, the Lebanese Army deployed reinforcements to the area.

“What happened today is dangerous and could spark a security incident,” a political source told Lebanon’s The Daily Star.

The blocks had been placed “without informing UNIFIL [United Nations Interim Force in Lebanon],” a Lebanese Army statement said.

Speaker Nabih Berri expressed his concern over the “dangerous” developments. “This is something that must be carefully monitored because it is very dangerous. There is something I know and it will be time to show it,” he told visitors at his Ain al-Tineh residence in the evening.

Berri said he would discuss Israel’s actions with US Undersecretary for Political Affairs David Hale, who is due to visit Lebanon next Monday.

The Higher Defense Council of Lebanon said in a statement that it considered “the Israeli actions along the southern border to be an attack on Lebanese territory, which is a clear violation of Article 5 of UN Security Council Resolution 1701.”

The council announced that it would submit a complaint to the Security Council and increase diplomatic contacts to explain Lebanon’s stance on the Israeli aggressions.

“The Higher Defense Council affirmed Lebanon’s commitment to every inch of its land and water as well as its constant readiness to complete the negotiations to resolve existing border disputes.”

In a statement, the Lebanese Army said Israel’s actions “threatened to resume hostilities,” and it stressed the need for a complete Israeli withdrawal from the Shebaa Farms, Kfar Shuba hills and the occupied part of Ghajar.

Back in December, caretaker Lebanese Transportation Minister Youssef Fenianos announced that the country was set to lodge a complaint against Israel at the UN Security Council, after airstrikes launched by Israeli war planes targeting Syria threatened civilian airliners flying over the Lebanese airspace.

The minister said the aerial assaults had put at risk the lives of hundreds of civilians, who were on board passenger planes flying over Lebanon at the time of the attack.

Israeli forces last month also resumed construction of another segment of what they called cement border wall, opposite south Lebanon’s Kfar Kila, but halted due to pressure from UNIFIL after the Lebanese Army disputed several points planned for the wall.

A presidential palace source told The Daily Star that Thursday’s incident was more serious than the works last month. “This time they are building in areas that are disputed and not deemed theirs, so it’s a bit dangerous. Before they were building near the disputed areas and eventually backed away from them,” the source said.

Since the beginning of December, Israel has claimed to have uncovered what it claims are tunnels the Lebanese resistance movement Hezbollah dug into occupied territories.

Tags: Lebanon Israel border
Short Link rasanews.ir/201rEW
Share
0
Please type in your comments in English.
The comments that contain insults or libel to individuals, ethnicities, or contradictions with the laws of the country and religious teachings will not be disclosed