US Forces Should Leave Syria Soon 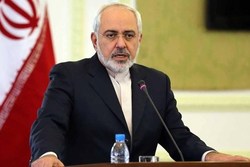 RNA - It will be better for the Syrian people if the Americans leave the country as soon as possible, Zarif told reporters on the sidelines of the Raisina Dialogue, held in New Delhi, on Wednesday.

Iranian foreign minister was in India to attend Raisina Dialogue which is a multilateral conference held annually in New Delhi.

Zarif also said that the Americans did not provide security for anybody.

Trump said late in December that the US forces would be pulled out from Syria since the ISIL terror group had been defeated there.

In Russia, Kremlin Spokesman Dmitry Peskov said that the presence of the US forces in Syria did not help the political and diplomatic settlement of the crisis in the Middle Eastern country.

"The presence of the US forces on the Syrian soil does not help reach the political and diplomatic settlement. Of course, the involvement of Washington in the relevant talks under the UN bumbershoot, the harmonious work of the US officials with (UN Envoy for Syria Staffan) de Mistura in the interests of this settlement would contribute to reaching this final goal," Peskov told Russia’s Channel One.

According to Fars News Agancy, the Kremlin spokesman recalled that the US presence in Syria was in violation of international law, adding that in some areas under the US control, there was a humanitarian catastrophe and terrorists were being equipped with weapons.

The spokesman also recalled that the US forces were "always withdrawing from some places," like Afghanistan and Iraq where the US troops remain stationed for years.

Tags: Zarif Iran Syria US
Short Link rasanews.ir/201rET
Share
0
Please type in your comments in English.
The comments that contain insults or libel to individuals, ethnicities, or contradictions with the laws of the country and religious teachings will not be disclosed