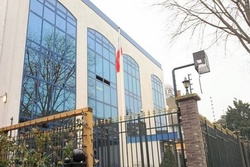 Iranian Ambassador to the Hague Alireza Jahangiri underlined the need for more security protection in areas near the country's embassy in the European city after the recent raid by members of al-Ahwaziyeh terrorist group.

RNA - Jahangiri in contacts with the Dutch officials emphasized the responsibility of the country's government for protection of the embassy's buildings and staff, and criticized the Netherland for "harboring terrorist groups", an Iranian diplomat in the Hague said on Thursday.

The Dutch authorities expressed regret over the incident and assured the envoy that the embassy and its staff would be protected, he added.

The video of the raid released on social media on Wednesday evening depicts the assailants holding al-Ahwaziyeh flag and throwing objects at the embassy building. No damage or injury was reported.

The 'al-Ahwaziyeh', which receives support mainly from Saudi Arabia, is the terrorist group which claimed responsibility for the September attack on a military parade in Ahwaz, Southwest of Iran, killing 26 and wounding 69 others.

Iran has several times blasted the European states for their sheltering and support for the terrorist groups, including al-Ahwaziyeh.

Tags: Iran Terrorist Netherland
Short Link rasanews.ir/201rEP
Share
0
Please type in your comments in English.
The comments that contain insults or libel to individuals, ethnicities, or contradictions with the laws of the country and religious teachings will not be disclosed