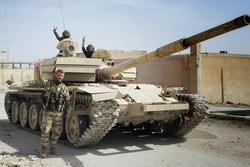 The Syrian Army's missile and artillery units pounded the terrorists' movements from Wadi al-Dorat in Eastern al-Latamanieh in Northern Hama towards the Syrian Army's military point in the region, killing and wounding a large number of terrorists, while forcing others to retreat.

The Syrian army's artillery units also targeted and pounded a terrorist group who intended to penetrate into the army's military positions from the town of Mourek, killing and wounding a number of them as well as destroying their weapons and military equipment.

According to Fars News Agancy, in Southeastern Idlib, the army's artillery units also targeted and pounded Tahrir al-Sham's movements from al-Khowin and al-Zarzour regions towards the army's military positions before they could penetrate into their positions.

Meantime, Tahrir al-Sham al-Hay'at terrorists captured 50 towns and villages in Idlib, Hama and Aleppo during clashes with other terrorist groups in the last eight days.

A senior militant spokesman said that the Kurdish People's Protection Units (YPG) are highly likely to join the Syrian Army after they reached an agreement on taking back the regions they have already lost to the Turkish Army.

"There is no obstacle facing cooperation between the Kurdish militants and the Syrian Army," the Arabic-language service of Russia Today (RT) quoted Spokesman of the Kurdish People's Protection Units Nuri Mahmud as saying.

He noted that the YPG will join the Damascus troops after political agreements are worked out on how to form a joint army.

Mahmud noted that in case the YPG joins the Syrian Army, the occupied regions of Afrin, Jarablus, al-Bab and Idlib will be liberated from the control of the Turkish Army and its allied militants.

He also said recapturing Afrin region is a priority for the Kurdish population.

Tags: Terrorist Syria Hama Idlib
Short Link rasanews.ir/201rEJ
Share
0
Please type in your comments in English.
The comments that contain insults or libel to individuals, ethnicities, or contradictions with the laws of the country and religious teachings will not be disclosed