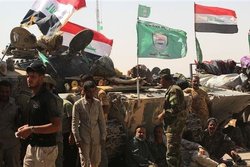 A senior legislator in Baghdad on Wednesday warned the Pentagon to avoid a retreat from Syria to Iraq, saying that the US military troops will be targeted by Hashd al-Sha'abi (popular forces) otherwise.

RNA - Amer al-Fayez, a representative of Iraq's al-Bina coalition, was quoted by the Arabic-language al-Ma'aloumeh news website as saying on Wednesday that if the US forces cross the border into Iraq after withdrawing from Syria without a prior permission of the government in Iraq, they will come under attack by Hashd al-Sha'abi.

He added that the US forces cannot step onto Iraq's territories due to Hashd al-Sha'abi's firm opposition to their deployment.

Hashd al-Sha'abi had earlier put its forces on alert to confront any possible danger resulting from the US forces' withdrawal from Syria declared by President Donald Trump.

A senior commander of Hashd al-Shaabi underlined the necessity for Washington to evacuate its military men from Iraq.

"Some reports have been released about establishment of new US bases in al-Anbar and Saladin provinces which is a violation of Iraq's national sovereignty," Qassim Muslih, the commander of Hashd al-Shaabi forces in al-Anbar province, said, the Arabic-language al-Mayadeen news channel reported on Tuesday.

He underscored the necessity for the US forces to leave Iraq, and said, "We are capable of supporting and protecting our land and borders and there is no need for the deployment of foreign forces."

Demands for the withdrawal of US forces from Iraq have increased after Trump in a surprise visit late December landed at an airbase West of the Iraqi capital, Baghdad, where he thanked the soldiers for their service.

According to Fars News Agancy, Iraqi political and popular forces' leaders have condemned Trump's unannounced trip to Iraq as a violation of their country's sovereignty.

A spokesman of Hezbollah al-Nujaba (one of the Iraqi popular forces) described Trump's visit to the country as a violation of its sovereignty, stressing that the move would receive a crushing response.

"The foolish US president, Donald Trump, should know that Iraq has earned its sovereignty by donating blood and the US bases have no place in this country which is a pivot of resistance," Hashem al-Moussavi in a statement last Thursday.

He underlined that Trump's violation of Iraq's sovereignty will not remain "unpunished", adding that the Iraqi government should now expel the US forces.

Al-Moussavi said that Trump wants to undermine Iraq's sovereignty by his visit to Ain al-Assad base, and added, "We will not allow Iraq to turn into a base for the US to threaten the neighboring states."

Tags: Iraq Hashd US
Short Link rasanews.ir/201rED
Share
0
Please type in your comments in English.
The comments that contain insults or libel to individuals, ethnicities, or contradictions with the laws of the country and religious teachings will not be disclosed