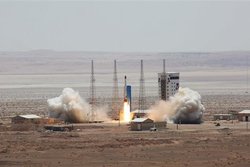 Iranian Foreign Minister Mohammad Javad Zarif says Tehran will continue with its aerospace program despite US warnings, stressing there is no international law banning such a program.

RNA - Zarif also told Reuters on Wednesday that leaving a 2015 nuclear deal agreed with world powers was an option available with Tehran but was not the only option on the table.

His remarks came in reaction to warnings by US officials against Iran’s pursuing space rocket launches that Washington claims would violate a UN Security Council resolution because they use ballistic missile technology.

Secretary of State Mike Pompeo warned Iran last week to scuttle its plans for satellite launches that the United States claims involve technology that could be used in intercontinental ballistic missiles capable of reaching the US mainland.

“Iran will ask no one’s permission to develop its peaceful aerospace industries and will firmly proceed with its plans,” he said.

He added that Iran had successfully made preparations for the launch of two satellites namely Payam (Message) and Doosti (Friendship) and would do so upon an order by relevant officials.

In February 2015, Iran placed its domestically-made Fajr (Dawn) satellite into orbit, which is capable of taking and transmitting high-quality and accurate pictures to stations on Earth.

Iran rejects claims that its launches violate UN Security Council Resolution 2231 that enshrines the nuclear deal between Iran and six world powers, including the US.

According to Press TV, Pompeo’s invocation of the resolution seems awkward, as President Donald Trump withdrew the US from the agreement in May 2017 and then in early November reinstated sanctions that had been lifted under the deal.

Iran says the US is now in violation of the Security Council resolution it voted for, while the International Atomic Energy Agency has consistently found Iran has been meeting its commitments.

Resolution 2231 was adopted by the UNSC in July 2015 to endorse the JCPOA.

The document terminated the provisions of previous UNSC resolutions against Iran, some of which had imposed restrictions on Iranian missile activities. Such activities are not prohibited under Resolution 2231, which merely calls on Iran “to refrain from any activity related to ballistic missiles designed to be capable of delivering nuclear weapons.”

Iran says neither its space program nor its missile launches are banned by Resolution 2231.

Tags: Zarif Iran US aerospace program
Short Link rasanews.ir/201rE7
Share
0
Please type in your comments in English.
The comments that contain insults or libel to individuals, ethnicities, or contradictions with the laws of the country and religious teachings will not be disclosed