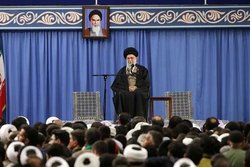 Leader of the Islamic Revolution Ayatollah Seyyed Ali Khamenei has warned the United States of an “unprecedented defeat” in its campaign of sanctions and pressure against the Iranian nation.

RNA - Addressing a group of people from the holy city of Qom on Wednesday, the Leader said the Americans speak gleefully of “strongest sanctions in history” against Iran, “but the Iranian nation will, God willing, make them suffer an unprecedented defeat in history.”

“The nation and authorities should attentively work to turn the American sanctions into an unprecedented defeat for the Great Satan (the US), as was done during the era of Sacred Defense (the eight-year Iraq-imposed war),” said the Leader.

The United States first brought Iran under sanctions in the wake of the Islamic Revolution in 1979. It slapped new bans against the country in 1987 at the height of Iraq’s Western-backed war against Iran.

The eight-year war is known in Iran as the Era of Sacred Defense due to the extreme sacrifice and resistance exercised by the Iranian nation in the face of the invader and its Western patrons.

Washington lifted some of its sanctions after the implementation of a 2015 multilateral nuclear deal with the Islamic Republic and other world countries. It, however, left the deal unilaterally last year -- even though the accord has been ratified in the form of a United Nations Security Council resolution -- and reimposed the sanctions.

The Leader further urged steadfastness in the face of the US and Europe’s “militarism, bluster, and idle talk,” saying, “Neither their threats, nor their words and promises, and not even their signatures is creditworthy.”

Ayatollah Khamenei also referred to predictions of a “regime change” in Iran by certain US officials by the end of 2018.

“A while ago, a US politician had said, among a gathering of terrorists and thugs, that he hopes to celebrate this Christmas in Tehran,” Ayatollah Khamenei said.

The Leader was referring to comments by US National Security Advisor John Bolton, a long-time regime change advocate, who often speaks at gatherings of the anti-Iran MKO terrorist outfit.

According to Press TV, Ayatollah Khamenei said, “Christmas was a few days ago. This is how US calculations work.”

“Some US officials pretend that they are mad. Of course I don’t agree with that. Rather, they are first-class idiots,” he said.

During the Sacred Defense Era, “the enemies would not even let us have barbed wire,” the Leader recalled, adding, “But the nation and authorities used the sanctions as a means of [enabling] dependence on domestic capabilities and the flourishing of talents in a way that it turned Iran into the region’s unparalleled power today.”

Tags: Ayatollah Khamenei US Iran Sanction
Short Link rasanews.ir/201rE1
Share
0
Please type in your comments in English.
The comments that contain insults or libel to individuals, ethnicities, or contradictions with the laws of the country and religious teachings will not be disclosed