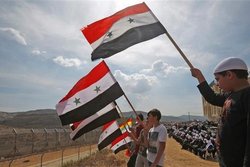 Jordan has hit out at Israel over its recent call for the United States to recognize the regime’s occupation of the Golan Heights, saying Tel Aviv will have to eventually pull its forces out of the Syrian region.

RNA - “The Golan Heights are occupied Syrian territory. International law is clear on that. It has to be treated as such,” Jordanian Foreign Minister Ayman Safadi told a press conference with US Secretary of State Mike Pompeo in Amman on Tuesday.

He then called on the Tel Aviv regime to leave the Golan Heights based on the 1974 Golan ceasefire deal with the Damascus government.

Just two days earlier, Prime Minister Benjamin Netanyahu stressed that Israel would “never leave the Golan Heights,” urging all countries to recognize the regime’s grip over the occupied territory. Netanyahu made the comments in a meeting with US National Security Adviser John Bolton in the occupied Jerusalem al-Quds.

In 1967, Israel waged a full-scale war against Arab territories, during which it occupied a large swathe of Syria’s Golan and annexed it four years later, a move never recognized by the international community.

In 1973, another war, known as the Arab-Israeli War, broke out. A year later, a United Nations-brokered ceasefire came into force, according to which Tel Aviv and Damascus agreed to separate their troops and create a buffer zone in the Golan.

Israel has over the past decades built dozens of settlements in the Golan Heights in defiance of international calls for the regime to stop its illegal construction activities.

According to Press TV, Syria has repeatedly reaffirmed its sovereignty over the Golan Heights, saying the territory must be completely restored to its control.

Since 2011 – when foreign-sponsored militancy first broke out across Syria – Israel has been using Golan to prop up anti-Damascus Takfiri terrorists.

Elsewhere in his remarks, Safadi, whose country is the custodian of Jerusalem al-Quds' Muslim holy sites, described the decades-long Israeli-Palestinian conflict as the region’s central problem.

While Amman and Washington “don’t always agree on every issue, we will continue to work together to solve the region’s problems,” he added.