US pure obsession with Iran like attitude of failing psychotic stalkers 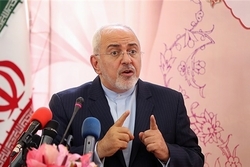 Iranian Foreign Minister Mohammad Javad Zarif says the United States has a "pure obsession" with Iran which is very much like the attitude of "persistently failing psychotic stalkers."

RNA - The top Iranian diplomat took to his official Twitter account on Tuesday to react to recent remarks made by US Secretary of State Mike Pompeo and National Security Adviser John Bolton against the Islamic Republic.

"While ordinarily it might be flattering, @SecPompeo’s and @AmbJohnBolton’s pure obsession with Iran is more and more like the behavior of persistently failing psychotic stalkers," Zarif said.

While ordinarily it might be flattering, @SecPompeo’s and @AmbJohnBolton’s pure obsession with Iran is more and more like the behavior of persistently failing psychotic stalkers.
In effect, US is substituting a real foreign policy with Iran- obsession and -phobia.
— Javad Zarif (@JZarif) January 8, 2019

He emphasized that the US is "substituting a real foreign policy with Iran- obsession and -phobia."

Speaking during a news conference with his Jordanian counterpart Ayman Safadi in Amman on Tuesday at the start of his second trip to the Middle East, Pompeo said that his country was "redoubling not only our diplomatic but our commercial efforts to put real pressure on Iran."

He pointed to the US decision to withdraw troops from Syria and claimed that the move would not jeopardize Washington's efforts to counter threats in the region, which, he alleged, came from Iran and the Daesh terrorist group.

"The most significant threats to the region are Daesh and the Islamic Revolution," said the US secretary of state.

Last month, US President Donald Trump made an abrupt announcement to withdraw the roughly 2,000 American troops from Syria, claiming that the US had accomplished its goal of defeating Daesh.

“We have defeated ISIS in Syria, my only reason for being there during the Trump Presidency,” Trump said in his Twitter account, using an acronym for the terrorist group.

US National Security Adviser John Bolton also claimed on Sunday that Iran poses a threat to the region through its "quest for deliverable nuclear weapons."

According to Press TV, Iranian Defense Minister Brigadier General Amir Hatami said on Monday that the era of American order and Western hegemony has reached its end and time has come to usher in the post-West age in West Asia.

"The Islamic Revolution (in Iran) and the resistance in Syria, Iraq and Yemen show the reality that the West is not the center of regional developments anymore, and the compulsory US exit from Syria indicates the failure of their (the US) strategies in the region," Hatami said in an address to the International Conference on Defense and Security in West Asia in Tehran.

Also on Monday, the Iranian foreign minister reacted to a picture showing the US national security advisor wearing virtual reality goggles allegedly reconstructing the past on a tour in the Israeli-occupied holy city of Jerusalem al-Quds.

On Sunday, Bolton and others were photographed wearing the device during a visit to the Jewish holy site of the Western Wall in East al-Quds, which Palestinians want as the capital of their future state.

It's said a picture says a thousand words. This picture, however, says more than a thousand words about decades of failed US policies in our region.
In the valley of the blind, even those with VR glasses are still blind. pic.twitter.com/Tyip6iKbFl

“It's said a picture says a thousand words. This picture, however, says more than a thousand words about decades of failed US policies in our region,” Zarif tweeted on Monday.

Tags: Iran John Bolton US Zarif
Short Link rasanews.ir/201rDk
Share
0
Please type in your comments in English.
The comments that contain insults or libel to individuals, ethnicities, or contradictions with the laws of the country and religious teachings will not be disclosed