Netanyahu's Friends Made Billions from 9/11 Attacks 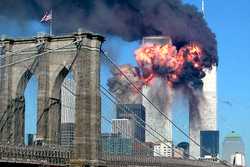 Zionist businessmen Larry Silverstein and Lewis Eisenberg, who are close friends of Israeli Prime Minister Benjamin Netanyahu, made billions of dollars from the destruction of the Twin Towers on September 11, 2001, says Dr. Kevin Barrett, an American academic who has been studying the events of 9/11 since late 2003.

RNA - Dr. Barrett, a founding member of the Scientific Panel for the Investigation of 9/11, made the remarks in an interview while commenting on the Dark Overlord’s threat of leaking thousands of secret documents related to 9/11.

The hacker group has said the leak will have devastating consequences for the US "deep state," that collection of members of permanent employees of the intelligence, security and diplomatic services who operate independently of changes in the administration as, in essence, a permanent government.

The group has already released decryption keys for 650 documents it says are related to the September 11, 2001 terrorist attacks, but it is   just a fraction of the 18,000 secret 9/11 documents probably stolen from insurers, law firms, and government agencies, RT website reported on Friday.

The hackers at the Dark Overlord have described the secret the September 11 documents as "the 9/11 Papers."

“It’s very interesting. I think the important thing that people need to know about this is why it’s important, why there could be anything important in these insurance companies' documents,” Dr. Barrett told Press TV.

“So we need to go back to 2001 when the World Trade Center complex and especially the two Towers were creating terrible problems for the Port Authority which is the city government agency that owned these buildings,” he added.

“The Twin Towers were riddled with asbestos fireproofing, which was illegal, and they were under court order issued in January or early 2001 to remove the asbestos from the Towers. This would have cost billions, perhaps double-digit billions of dollars – economically a non-starter,” he stated.

“New York had been trying to find a way to demolish the Towers for years. They had high vacancy rate and antiquated communication infrastructure. But they could not tear them down because there was no way to do it economically,” the analyst said.

“So two months before 9/11 an alleged organized crime figure named Larry Silverstein got a non-low-bid contract from Lewis Eisenberg, who was the head of the Port Authority. Both of these guys are very close to Netanyahu. They are hardcore Zionist billionaires,” he noted.

‘Silverstein walked out with close to $5bn in cash’

“And had the Trade Center not been demolished, this would have been the worst real estate investment in history. But because Silverstein doubled the insurance money from what the Port Authority had held, and managed to get lucky on September 11, he walked out of this with close to $5 billion in cash,” he pointed out.

“He had negotiated it with the insurance company to give him the cash settlement beforehand. And then he also claimed a double indemnity, that is he wanted to double the money because he said there were two separate and unrelated terrorist attacks, namely the two alleged airplanes,” the researcher said.

“And maybe we will find some of the answers in these insurance documents because clearly nobody wanted to be left holding the bag to the tune of billions of dollars of insurance money for an obvious inside job in which these Towers, not just the Twin Towers, but also World Trade Center 7 as well, were obviously blown up, taken down in a controlled demolition,” he stated.

Tags: 9.11 Israel Zionist Netanyahu
Short Link rasanews.ir/201rDR
Share
0
Please type in your comments in English.
The comments that contain insults or libel to individuals, ethnicities, or contradictions with the laws of the country and religious teachings will not be disclosed