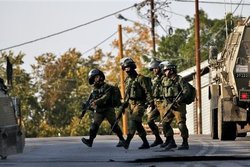 Israeli forces have shot and injured a Palestinian girl, whom they alleged to have attempted a stabbing attack against Israeli police officers at a checkpoint in the northern part of the occupied West Bank.

RNA - Local sources, requesting not to be named, said Israeli forces shot and injured the unnamed Palestinian girl at Za'tara checkpoint south of Nablus, located approximately 49 kilometers (30 miles) north of Jerusalem al-Quds, on Monday afternoon, and did not allow paramedics to attend to her.

The Israeli military later claimed in a statement that the Palestinian girl was shot when she did not stop upon orders by soldiers.

Tensions continue to simmer in the occupied Palestinian territories more than a year following US President Donald Trump's recognition of Jerusalem al-Quds as Israel’s capital and relocation of the US embassy to the occupied city.

The Palestinian Ministry of Health said in a statement that Israeli forces raided al-Bireh, located 15 kilometers (9.3 miles) north of Jerusalem al-Quds, early on Sunday, and violently ransacked a number of houses and shops, triggering clashes with local residents.

The ministry said a bullet struck a teenager, whose identity was not immediately known, in the head, causing a skull fracture and internal bleeding. The injured Palestinian was taken to hospital for treatment.

According to Press TV, the soldiers also raided a Peugeot car showroom in the city, and seized the recording of its surveillance cameras before withdrawing from the area.

On December 21, 2017, the United Nations General Assembly overwhelmingly voted in favor of a resolution that calls on the US to withdraw its controversial policy shift.

Despite the vote, the United States went ahead with the embassy transfer on May 14 last year, triggering demonstrations in the occupied Palestinian territories, Iran, Turkey, Egypt, Jordan, Tunisia, Algeria, Iraq, Morocco and other Muslim countries.

Israel’s crackdown in Gaza left over 60 protesters dead in the impoverished coastal enclave on that day alone.

Angered by Trump’s move, Palestinian President Mahmoud Abbas boycotted his administration, saying Washington is no longer qualified to serve as the sole mediator in the decades-long conflict with Israel, and that an international mechanism should be devised to replace the US in the so-called peace process.

Tags: Israel Palestinian stabbing attempt
Short Link rasanews.ir/201rDL
Share
0
Please type in your comments in English.
The comments that contain insults or libel to individuals, ethnicities, or contradictions with the laws of the country and religious teachings will not be disclosed