Taliban seek venue change for peace talks with US to Qatar 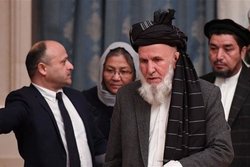 Taliban militants say they will not attend planned peace talks with the United States in Saudi Arabia this month and want a shift of venue to Qatar, the political headquarters of the group.

RNA - A senior Taliban member told media outlets on Sunday that the militant group had sought to counter Riyadh's push to include the Afghan government in talks.

"We were supposed to meet US officials in Riyadh next week and continue our peace process that remained incomplete in Abu Dhabi last month," the Taliban official said.

"The problem is that leaders of Saudi Arabia and the United Arab Emirates (UAE) wanted us to definitely meet the Afghan government delegation, which we cannot afford to do now, and we have cancelled the meeting in Saudi Arabia," he added.

The upcoming negotiations are scheduled between the leaders of Taliban and US special envoy Zalmay Khalilzad and are to discuss the withdrawal of foreign forces from Afghanistan and a possible ceasefire in 2019.

Another senior Taliban leader said the group had explained to Saudi Arabia that it was not possible for Taliban to meet the Afghan government at this stage.

"Everyone is aware of the fact that the Afghan government wanted the US and its allies not to leave Afghanistan and we have paid a heavy price to expel all foreign forces from our country."

"Why should we talk to the Afghan government?"

Leaders of the militant group reject the Kabul government's offer for direct talks.

Khalilzad earlier confirmed he had held "productive" meetings in Abu Dhabi with Afghan and international partners "to promote intra-Afghan dialogue towards ending the conflict."

The Kabul government has stepped up efforts to convince Taliban to end the 17-year militancy amid Washington’s failure on the battleground.

Taliban have previously said the presence of foreign troops is the biggest obstacle to peace in Afghanistan.

Khalilzad said Taliban’s demand remained an agreement over the withdrawal of foreign forces from Afghanistan. The US, meanwhile, has sought assurances from the militant group that its forces would not be attacked.

Tags: Taliban US Qatar
Short Link rasanews.ir/201rD8
Share
0
Please type in your comments in English.
The comments that contain insults or libel to individuals, ethnicities, or contradictions with the laws of the country and religious teachings will not be disclosed