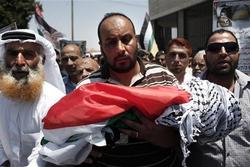 A Palestinian teenage boy has sustained serious injuries after Israeli military forces stormed a city in central West Bank as tensions continue to simmer in the occupied Palestinian territories more than a year after US President Donald Trump declared Jerusalem al-Quds as the capital of Israel.

RNA - The Palestinian Ministry of Health said in a statement that Israeli forces raided al-Bireh, located 15 kilometers (9.3 miles) north of Jerusalem al-Quds, early on Sunday, and violently ransacked a number of houses and shops, triggering clashes with local residents.

The ministry said a bullet struck a teenager, whose identity was not immediately known, in the head, causing a skull fracture and internal bleeding. The injured Palestinian was taken to hospital for treatment.

The soldiers also raided a Peugeot car showroom in the city, and seized the recording of its surveillance cameras before withdrawing from the area.

The report said the settler attacks ranged from “beating up and throwing stones at Palestinians, painting racist and anti-Arab or anti-Muslim slogans, damaging homes and cars to cutting down trees belonging to Palestinian farmers.”

Haaretz attributed the decrease in settler attacks during 2016 and 2017 to the "response of the [Israeli] authorities following the firebombing of a home in the West Bank village of Duma, which took the lives of three members of the Dawabsheh family."

On July 31, 2015, a large fire broke out after settlers threw firebombs and Molotov cocktails into two Palestinian houses in the town of Duma, located 25 kilometers southeast of Nablus, setting them ablaze while their inhabitants were asleep.

The arson attack killed 18-month-old baby, Ali Dawabsheh, and critically wounded his father and mother, Sa’ad and Riham, who later succumbed to their injuries.

According to Press TV, Ali’s four-year-old brother, Ahmad, who was also wounded in the assault, remained the sole survivor of the ill-fated family.

The incident sparked angry reactions from Palestinians, including political and resistance groups.

Price tag attacks are acts of vandalism and violence against Palestinians and their property as well as Islamic holy sites by Israeli settlers.

Tags: Palestinian Israel West Bank
Short Link rasanews.ir/201rD6
Share
0
Please type in your comments in English.
The comments that contain insults or libel to individuals, ethnicities, or contradictions with the laws of the country and religious teachings will not be disclosed