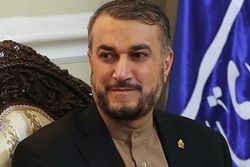 Advisor to the Iranian Parliament Speaker Hossein Amir Abdollahian referred to scientific and technological progresses of Iran, and said the Iranian nation and Establishment have defeated Trump and Netanyahu in a comprehensive economic and psychological warfare.

RNA - "Powerful Iran stands beside its allies in the region, improving its modern development plan and defense measures," Amir Abdollahian wrote in a post on his Twitter account.

The Iranian official referred to Iran’s progresses with a photo posted along with his tweet on Thursday, to assert that all pressures of US and Israel against Tehran were ineffective to obstruct the country’s progression forward.

Iranian nation and Establishment defeated Trump and Netanyahu in a comprehensive economic and psychological warfare, and on the path to development and progress, they surprise the world, he added.

In a related front, on December 23, Iranian Foreign Minister Mohammad Javad Zarif said all capacities of the country must be mobilized to undermine the negative impacts of the US sanctions, highlighting that defeating the US policy of bringing Iran's oil exports to zero must stand atop the national agenda.

A week before that, Zarif underlined that the US sanctions have always been ineffective to change the policies of Iran, highlighting that Washington’s embargos just hurt ordinary people.

Referring to the policy adopted by the previous US administration to start talks with Iran over the country's nuclear program, Iran's diplomatic chief said, "It was U-turn on part of US, which allowed #IranTalks to proceed. Same dynamic today," in a clear reference to the fact that instead of withdrawing from the Iran nuclear deal, the new American government had better settle its disputes with Iran at the negotiating table.

Zarif added in his Twitter post that Iran and the remaining signatories to the JCPOA "are at table," emphasizing that "it is [the] US, which has decided to walk away and sow violence & chaos."

On Saturday December 15, Zarif told the forum in Qatari capital city of Doha that Iran has survived all the US pressures and sanctions in the past 40 years, highlighting that the ones who abandon engagement with Tehran will be the losers.

“Trump has called for negotiations despite his hostile policies, and we have responded to him that if he was joking,” he highlighted there.

On November 05, the European Union, France, Germany and Britain issued a joint statement regretting US' decision to impose new sanctions against Iran, saying that they will continue supporting the European companies engaging in legal business with Iran.

The reaction came after the US Treasury Department announced all sanctions on Iran lifted under the 2015 nuclear deal will be back in force on November 5.

According to Treasury Secretary Steven Mnuchin, the sweeping sanctions will see 700 people blacklisted, including people who were granted relief under the 2015 deal, as well as over 300 new names.

Mnuchin said the sanctions will also target payments made through the EU’s SPV channel.

He also warned global financial messaging service SWIFT that it could be punished if it doesn’t cut off financial services to entities and individuals doing business with Iran.

"SWIFT is no different than any other entity… We have advised SWIFT that it must disconnect any Iranian financial institutions that we designate as soon as technologically feasible to avoid sanctions exposure,” he noted.

His remarks dismissed an earlier report by The Washington Free Beacon, which claimed senior State Department officials have convinced Secretary of State Mike Pompeo to allow Iran to remain connected to SWIFT.

A senior administration official told Bloomberg that waivers were aimed at preventing oil price hikes and would be granted in exchange for continued import cuts.

According to Fars News Agancy, US President Donald Trump announced on May 8 that Washington would no longer remain part of the Joint Comprehensive Plan of Action (JCPOA) and promised to re-impose the highest level of economic sanctions against Iran.

Tags: Iran Trump Netanyahu
Short Link rasanews.ir/201rCm
Share
0
Please type in your comments in English.
The comments that contain insults or libel to individuals, ethnicities, or contradictions with the laws of the country and religious teachings will not be disclosed